If you didn’t know (then you probably don’t follow us on Instagram), we’ve been cohosting the Shelf Help Readathon with the lovely Jaz and Sharn. We wanted to come together and host something that would help people take care of their shelves and themselves in the last couple of weeks.

The whole idea of the readathon was to read as many books as possible from your TBR that you’ve probably had the longest or don’t think about too often. We had five prompts to create a TBR, however it didn’t stop there. These five prompts were: 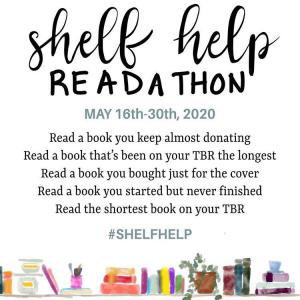 That’s five books over a two week period. To recap, my TBR was:

A Long Way Down by Nick Hornby
Cinder by Marissa Meyer
I’ll Give You The Sun by Jandy Nelson
The Miseducation Of Cameron Post by Emily M. Danforth
My Twentieth Century Evening and Other Small Breakthroughs: A Noble Lecture by Kazuo Ishiguro

I had high hopes for this readathon, and clearly thought i was going to get through quite a lot. Now i must admit, i gave up on my readathon TBR two days before it ended, and did not get around to reading The Miseducation of Cameron Post. This was purely because i just simply wasn’t in the mood for it. It has a very heavy topic, and i have read over half of the book previously and enjoyed it, however i just couldn’t throw myself in to it at the time. I wanted some more light reads, and i think i lacked those massively on my TBR.

I did however get around to reading the other four books on there, and i did actually enjoy them all. I first read I’ll Give You The Sun, which is something i’ve slacked on for a LONG time now. I really loved the story and the characters, and i’m a sucker for anything artsy. It genuinely very pleasently surprised me, and i can’t wait to read more from Jandy Nelson now.

I then picked up A Long Way Down. There was a time when i owned a lot of Nick Hornby books. When i first started reading and collecting books, i tended to mainly charity shop and his books always turned up. So i had loads of them. I read two when i was in my teens, and they never struck me as enjoyable or memorable. I’d kept A Long Way Down because it was the story that appealed to me the most. Whereas i had some issues with this book, it did stan as the book by Nick i’ve enjoyed the most.

I then picked up my shortest read which was by Kazuo Ishiguro. I’ve never been particularly attached to this author, but i’ve been interested in what he’s done. I’ve read Never Let Me Go and adored the story, and this little snippet of his life did not disappoint at all.

The last book i read for the readathon was Cinder by Marissa Meyer, this was the book that i’ve had on my TBR the longest, considering i’ve had this book since before university, and i started university seven years ago, i felt like it was time to give it a read. And i pretty much read the entire thing in two sittings. I loved the story of this, and i completely understand why people love this world. There were twists i wasn’t expecting, but still had that trope feel of books from 2014. I really enjoyed the characters and i think i want to continue on with the series!

I really enjoyed the books that i read for this readathon, and i honestly regret putting them off a little too much! It turns out, you end up sitting on really good books for a long time!

It has made me realise that i want to read more from my backlist, and try and get some books read that i haven’t in literally years. I add to my TBR all the time, but rarely read anything older than a year or two. This has definitely taught me to look back at some of my older books and find some joy in them.

Thank you for participating if you did, and let me know in the comments if your reading weeks were successful! Don’t forget to keep using the hashtag #ShelfHelp to talk about your recent reads with us!

🎉 It’s Sarah’s birthday! 🎉
Is it cold and snowy near you?
Are you a fellow stationery enthusiast?
✨ What’s an anthology you love? ✨
Gut Feelings by @yafictionados had it's book birthday yesterday!
What’s your first book of 2021?