*The book discussed in this post was gifted by Penguin.

When i got the email about Last Lesson by debut author, James Goodhand, i felt like the description pulled me in instantly. It contained a lot of my buzzwords and i was so excited to get my hands on a copy of it, to explore the world of mental health in teenagers. 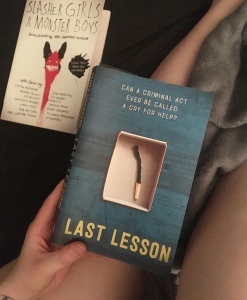 Ollie seemed to just always be there, he was never incredibly popular, he wasn’t unpopular, but he was a star pupil and very talented musician. After an accident, he became an outcast and was bullied by most people. His mental health declined and he suffered in silence. On his last day of school, he brings in a homemade bomb to finally get his own back.

I won’t lie, you get most of the information about this book from the back cover. There was very little i didn’t know going in to it, and i don’t know if that was a positive or negative in all honesty. The plot for me was still great, the idea of a student drove to such lengths as to make a bomb felt like something we definitely don’t talk about enough in YA mental health. I also feel like mental health in boys is definitely underrated, and this boosted that section of YA that needed a little bit of attention for me.

The characters for me lacked a little. Ollie as a character i really loved, and felt he was incredibly realistic. The other characters didn’t really do it for me. Ollie lives with his grandad, who felt like he had two different personalities at times. The kids that Ollie went to school with and were later bullied by didn’t sit well either. They seemed immature for sixteen year olds, and that just didn’t sit right in the story for me.

As you would expect, mental health took a very big centre focus in Last Lesson. Ollie’s mum suffers with mental health conditions, and naturally it seems they’ve been passed down to Ollie. He’s trying to understand his own mental health whilst it’s literally taking over his entire life. It was a really interesting representation and when he is assessed at the end of the book for his mental conditions, it becomes clear what had happened previously in the book. That aspect was written incredibly well and i enjoyed it.

The writing style itself didn’t pull me in as much as i wanted it to. There seemed to be some description that wasn’t necessary, and i ended up skimming a lot of paragraphs to get to the point of the story or scene. I really appreciate well used description often, especially with character movements, but it felt as though it was every time Ollie moved we had a page about it. Last Lesson also read sort of an experiment towards The Catcher In The Rye. Which is a book i absolutely adore and is in fact one of my favourite books, however the writing style didn’t completely fit with the tone of the book like it does with Salinger.

Overall, i’m incredibly glad i had the opportunity to read Last Lesson and i will be checking out any further books from James, i just don’t think the writing style really fit with me too well and i found some parts just a little dry.