I was so excited to get my hands on this book. Holly writes incredible YA fiction (and an adult novel debut), and they always focus on something that isn’t discussed very often or in-depth. When i found out that The Place I’ve Cried… was all about an abusive relationship that had broken down, i jumped at it. 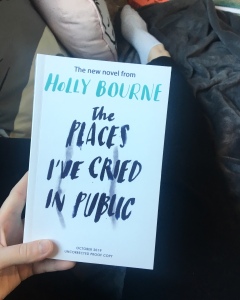 I didn’t want to do a proper review for this book, it seems silly. Whereas this book was absolutely stunning, had me hooked from the start and i literally hung on every word of it, i can’t bring myself to just write out that the characters were incredibly written and i felt every single feeling from grief to anger to happiness for this book. Instead i wanted to talk about some of the things it’s taught me, and how i look at my past experiences.

As context, i myself have gone through a mentally abusive relationship, and was stuck in that for over a year. I found myself completely relating to Amelie and her thoughts and experiences having her relationship turn sour. It wasn’t until the middle of the book it really started to kick in for me what was going on, and i felt myself mimicing with this story what happened to me. The completely falling for someone, and the going along for the ride and then realising what was happening. I felt everything Amelie was going through.

I learnt a lot from this book from sitting on the outside and watching it happen to a character. One was to never lose track of yourself. I’ve done this so many times when i’ve been in relationships, and specifically the bad ones. It’s awful but you lose track of who you are and who your friends are, you lose everything that’s important to you. And i guess from this i learned that if it’s hard to keep doing what you’re doing, then it’s probably dangerous. Learn how to live with each others interests, not just leave them at the door and never speak of them again.

One of the main topics in this book is about Amelie falling for the nice guy at the start and finding that wasn’t all it was cracked up to be. If someone is that nice, and offering a too-good-to-be-true situation, i would always be wary. This for me has come from dating sites and numerous dates with numerous people anyway, but it’s sort of nice in a way to watch a character go through that sort of thing and you can really see it laid out in front of you. It was quite heart-breaking, but also excellently done.

The last thing i want to talk about that i picked up is that you should always be asking questions, and anger isn’t a responsible or respectable answer. I’ve personally dealt with this before too, when a genuine and honest question is met with anger and name calling, it probably isn’t going to be the answer you wanted. I was screaming at this book for Amelie to just walk away in this situation, she was too good, she couldn’t see what was around the corner but i, the reader, could do. She was too good to be shouted at in public over absolutely nothing and making herself anxious and paranoid. I wanted to shake her because i’ve been through the same thing and it’s hard to watch from the outside.

Even though i took so much away from The Places I’ve Cried In Public, i was never once triggered and flew through the book. It’s stunningly written in a really gentle way, with plenty of excellent characters to take your mind of what’s happening. It’s an absolutely stunning novel by Holly and i urge absolutely everyone to go and pick it up in October.