You may have noticed that we had a read-along running across our social medias between the 11th and the 22nd of March. This was all in aid of celebrating the wonderful release of Proud, a new LGBTQ+ anthology from Stripes, which was curated by Juno Dawson and includes a whole host of great YA authors and some wonderful illustrators.

We have been lucky enough to get extremely involved with the release of Proud as we are fully supportive of all the authors in it, the point of the book and the publisher releasing it. We adore Stripes and I don’t think they could do any wrong to us. We celebrated the release of Proud at the start of the year at Stripes’ publishing event in London, we were a part of the blog tour for the book, which you can read HERE if you’d like (it’s one of our blog tour posts we’re both extremely pleased with) and we were happy to continue this support by hosting a read-along for the book, which is the build up to our book club at the end of the month, being all about Proud! If you didn’t know we were gay before, you do now…

We started our read-along on the 11th of March and read one story a day from the anthology, which gave us twelve whole days of the read-along to enjoy. We posted a lot over on our Twitter account about the stories we were reading, and what we enjoyed the most, and we also talked on Instagram about what we were reading.

What I really love about doing a read-along is the ability to chat to people about the story as you’re reading it. Because the stories are so short and digestible in a short space of time, it was nice to chat to others on Twitter each day about what we read, the themes and even the illustrations.

We started off on the first day with the first poem, Dive Bar by Caroline Bird. It’s one that really got us talking for our first dip in to Proud. Another story that got a lot of people talking was the magnificent The Phoenix’s Fault by Cynthia So. It’s so wonderfully written and a very welcome change in the anthology to the contemporary themes of a lot of the story. That seemed to be the opinion of a lot of people that were a part of our read-along.

One thing that we had the chance to talk about more with the read-along was the illustrations in the book. Each story has an illustration with it in Proud, each by a different wonderful illustrator. I personally really enjoyed Alice Oseman’s illustrations, as well as Alex Bertie’s. They’re wonderfully drawn and link excellently into the stories that were written.

Quick blogger swap! I just also wanted to comment on what my favourite stories and illustrations were and why. So, without further ado – here they are!

The Phoenix’s Fault was absolutely amazing! Honestly, I adored it. I truly would read a full length novel about this world and these characters. I loved Love Poems to the City because of just how real and emotional it felt. The characters felt very raw to me and I loved the style. The poem which ended the anthology was How To Come Out As Gay which I thought was such a powerful piece. It’s so brilliant as it addresses in such a clever way that there is not just one way to be gay. There isn’t one story – everyone in the LGBTQ+ community has their own individual experience and personality. Almost Certain is such a heartfelt story which doesn’t have sexuality at the forefront of the plot. It has such real characters and feeling in it which is always a sign of a wonderful story.

I always love Alice Oseman’s artwork and this was no exception! It’s an adorable illustration and it really made me smile! Alex Bertie’s was so lovely and I really enjoyed the way it matched all the little things in On The Run, a story which felt very real because of the small details. The artwork by Fatti Burke is really brilliant and also perfectly reflects the story it is based on. I love the style so much and it looks so bold!

We also did this read-along in conjunction with our monthly LGBTQ+ Book Club. Our meeting was on Friday and we discussed, as usual, what everyone thought of the book. As this is an anthology, we also decided to ask everyone if they had any favourite stories and illustrations.

The book had a solid, general star rating of 4/4.5 stars out of 5 by everyone who had read it. Everyone really enjoyed reading it and liked a good amount of the stories – the only reason people didn’t give it a 5 star was because of not enjoying some stories as much. It’s always really nice when everyone feels really positive about the book we have read that month! It creates a good discussion where everyone has something to say. 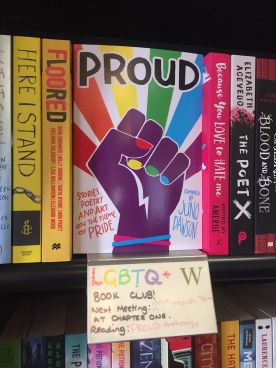 We spoke about a lot of the stories in depth! People commented that in The Phoenix’s Fault, they enjoyed how accessible it is for a fantasy story. It’s so difficult to write a whole world and get the feeling of it across without it feeling underdeveloped or overwhelming in a short story but we all agreed that this was done so excellently. It works as a short story but it also would be amazing as a novel. Someone commented that it really feels like the world continues past this short story and I completely agree!

The Courage of Dragons was popular with a couple of people – the Dungeons and Dragons references were really well done, although fairly hard to follow if you don’t know D&D. There is some great non-binary representation in this story which is brilliant because it’s an identity which is barely ever seen in books. The story also had quite a cool story to it – we agreed that the prom part felt a bit like a heist!

I Hate Darcy Pemberley was loved because of the sass and fun! It feels like a classic, early YA story and it was fun to have one set in a school and being gay was secondary to the plot which someone also said was refreshing! The Other Team was also discussed as a really positive one – it has a great message and the dynamics between the characters are wonderful. We also said how positive the poem How To Come Out As Gay by Dean Atta is! It is full of such powerful words and thoughts.

The book has a mixture of stories and poems – in terms of genre, styles and storylines. It also has lots of different identities represented in different ways. There are stories and poems about coming out, learning to accept yourself, being completely happy with yourself and also ones in which gender and sexuality is not the main focus at all. It just so happens that someone is gay or trans. We all agreed that this mixture is so refreshing and it’s nice to read so many stories which aren’t all ‘coming out’ stories.

Also, special mention for Juno’s foreword – it made someone cry and nearly all of us get a little emotional. It started the anthology off beautifully and couldn’t have been better.

Have you read Proud? Did you join in on our read-along? Let us know what you think of the book!