Jack Of Hearts (And Other Parts) by L.C. Rosen has been on my TBR for quite some time now. It was first released in the U.S. and took it’s sweet time to be picked up over in the U.K. So admittedly, i was impatient by the time its February release came around. 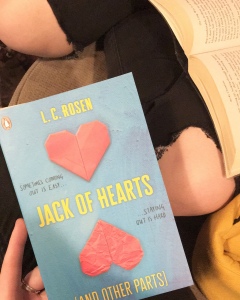 More so, i wanted to pick this book up because i was due to go to an event with Lev and interview him for the blog, so i at least wanted to know what the jist of the book was before then. I wanted to go in completely blind to this, and find out along the way what it was about.

The story follows Jack, who is out and proud at his school and is not quiet about his enjoyment of sex. So much so, that he starts a column online where people send in their sex queries and he answers them for the whole school to see. The story leads on to him being harassed by some strange messages in his locker and a whole bunch of other weird things, but the main aspects of the story to focus on are sex education, sex, friendship, mystery and sex.

I absolutely love the way this book was told. It’s so rare that a YA novel would be so open about sex, especially the sex lives of teenagers and how they differ from person to person. On top of that, Jack was an extremely open minded character. He never judged anyone on who they were or their preferences. It was wonderful to read about a character like that, i find them so rare in YA now.

Speaking of characters, i adored Jack’s friends. I’m a sucker for a YA friendship and Jack’s friends made the perfect friendship group. They were with him as much as he needed and became really integral parts of the story. It also showed quite prominently that two gay men can be friends, without any sexual interaction. That was a perfect addition to this story.

There were plenty of great messages and lessons to learn from this book about acceptance and trust. I loved how easy it was to read and nothing about gender or sexuality came across as jarring. Sometimes while reading YA LGBTQ+ it seems as though the author has pushed that aspect in to the book and it takes me away from the reading experience. I didn’t have this at all with Jack Of Hearts, for lack of a better phrase, it felt ‘normal.’

Lev’s writing really shone through as well with this book, i absolutely adored the ease of reading it and how fast i could get through the story. Everything flowed perfectly. It was my first read from Lev and i cannot wait to see what else he brings to the table regarding LGBTQ+ fiction.

This is a definite fun read for anyone interested in LGBTQ+ YA fiction. It’s hilarious with some laugh out loud moments and creates a great tension and mystery. It was truly a joy to read, and i hope i hear more from Jack’s world again at some point.

One thought on “Jack Of Hearts (And Other Parts) by L.C. Rosen”