I was absolutely thrilled by the announcement of the novelisation of Dear Evan Hansen. I stand by the fact that there are not enough novelisations of musicals out in the world, and this wonderful story definitely deserved one. I made it my goal to read it before the end of the 2018, because i absolutely adore the musical, and i did just that! 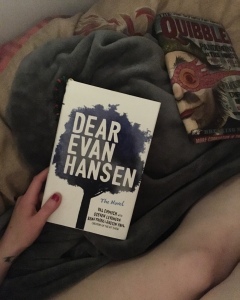 Over the last year or so my love for musicals has hit a teenage high all over again. I was a huge fan as a teenager, my love dipped and now i’m right back on that sing-a-long train. One of the musicals i’d become obsessed with was Dear Evan Hansen. I loved the soundtrack the second i heard it (if you’ve not heard it, it’s very boppy, give it a listen!) and i knew the musical would end up being one of my favourites.

I was so excited when this book got announced, and i grabbed myself a preorder copy to make sure i got it as soon as it was released. As i said before, i wanted to read it before the end of 2018 and i’m glad i got around to it when it was still being hyped.

In all honesty, i saw no real flaws with this book. I loved the story of it (i already knew i would), the writing was great, the musical incorporation was excellent and i just loved the characters and how they were portrayed in writing. I really did enjoy how the songs got mixed in to the novel, it was very effective and if you’ve listened to the soundtrack it really gives you an immersive experience. I haven’t felt so sucked-in by a book in a long time. It was a great feeling.

I absolutely adored the characters of this book. The Murphy family are now one of my favourite YA families, as they’re super supportive and everything that i want in a YA family based novel. All the relationships within the story felt real and un-forced, which is one of my main issues with fiction. Everything flowed really well between the characters.

There are some very sensitive themes discussed in the book. For anyone that isn’t aware, depression, mental illness, grief and suicide is talked about in Dear Evan Hansen excessively and they are the main themes. In my personal opinion, i thought it was dealt with in a very good way. Admittedly, some of it is insensitive, but the theme of the book is the characters being quite insensitive, so it’s intentional to the character flaws at the time. If you have any triggers to those topics, i probably wouldn’t pick the book up just to be sure. Suicide isn’t discussed in detail, but is mentioned throughout.

I’m really happy that i picked up Dear Evan Hansen sooner rather than later. It’s truly a really lovely book about relationships, owning up to your own mistakes and taking responsibility. I found it to be really powerful but a lot of fun as well. I cannot wait for the musical to arrive in London next year!