I was asked by the wonderful Faye at Clink Street Publishing to take part in the 12 Days Of Clink Street Blog Tour this Christmas. I really love doing events like this over the festive period because i love the inclusivity of it and having everyone work together over Christmas is just a nice feeling. 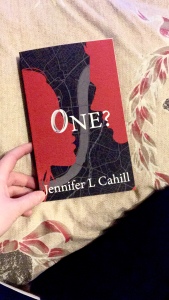 For the tour i had the choice of book to choose from and i took One by Jennifer L Cahill. It was released in June 2018 and sounds right up my street. Here’s the summary for you:

It’s London in the mid-noughties before Facebook, iPhones and ubiquitous wifi.

Zara has just moved to London for her first real job and struggles to find her feet in a big city with no instruction manual. Penelope works night and day in an investment bank with little or no time for love. At twenty-eight she is positively ancient as far as her mother is concerned and the pressure is on for her to settle down as the big 3-0 is looming. Charlie spends night and day with his band who are constantly teetering on the verge of greatness. Richard has relocated to London from his castle in Scotland in search of the one, and Alyx is barely in one place long enough to hold down a relationship let alone think about the future. One? follows the highs and lows of a group of twenty-somethings living in leafy SW4.

I was getting big Love Actually vibes from this book, and i really love a story where all the story-lines intertwine with each other. One did sound like a perfect read for me. I also really enjoyed the added aspect of having no Facebook or iPhones in the book. So many books i read now are filled with technology, and as someone who has grown up with all these privileges, it’s hard to imagine a life without it. It really captured me and i think it’s a really interesting place to write from.

With a sigh, Miss Miller adjusted her horn-rimmed spectacles to survey her classroom of five-year-olds. The heat was really getting to her, mixed up with the sporadic hot flashes, it was becoming unbearable. A small bead of perspiration made its way slowly down the middle of her back. Her polyester, pointed collar shirt was growing clammy from the heat. Miss Miller stood up and gazed down at the children who were fidgeting and terribly restless. Her hands were clammy, and suddenly, without warning, she dropped her wooden blackboard duster onto the desk. The loud thud broke the silence, and a little cloud of chalk dust puffed up from where it had landed. The sunshine was streaming in through the windows, and the children watched… mesmerised, as the chalk dust particles danced on the sunbeam. They were convinced that the fairies were busy at work in their classroom that sunny June afternoon. This was quite enough to unsettle the class of five-year-olds especially so near to going home time. The children started giggling and wriggling around in their seats. Miss Miller gave them a stern look and settled herself behind her desk on the oak rostrum. She decided that it was Alyx’s turn to share his homework with the class. ‘Alyx,’ she said, as she peered over her glasses.

Alyx didn’t flinch; he was far, far away… gazing at the fairies on the sunbeam…

‘Alyx! Alyx! Wake up! Come along now, we are waiting…’ Miss Miller snapped. Alyx nearly jumped out of his little skin! He began to stammer.

‘What? Em, ok,’ Alyx stuttered as he struggled to his feet from behind his tiny little desk. ‘… when I grow up, I wish I were, no, I wish I would be a Beatle!’ Alyx breathed a small sigh of relief, he was happy that he had remembered the words in English.

Miss Miller went puce, as the whole class started laughing. Alyx stood there defiantly. Alyx hated talking in front of the whole class; he was used to speaking French in school….not English! He would only be in this school for a few weeks while his mother was on location for a film in London, he didn’t understand these English people at all! He was constantly in trouble!

Miss Miller was livid! All she needed was the most minor disruption to set the class of five-year-olds off, today of all days. It was easily 30C outside and there was no escaping the heat. Miss Miller struggled to regain composure.

‘Don’t be silly Alyx, you can’t be a beetle, you are a little boy… why would you want to be an insect?!’ Miss Miller snapped.

‘No, Miss, not an insect… I want to be like one of the Beatles!’ Alyx went bright red, and started staring down at his feet, while he shuffled from one tiny little foot to the other.

‘The rock group?! Alyx really! Everyone else in the class has prepared their homework, sit down and come and speak to me at the end of class!’ Miss Miller was still puce as she said this, she took a deep breath to regain composure. She had no time for these ungrounded “celebrity” fantasies…

Meanwhile the whole class had erupted into fits of giggles. Alyx slumped back into his tiny little chair, feeling very sorry for himself indeed. Life is tough when you are five and grownups keep trying to break your dreams.

Miss Miller looked down at her list again, completely exasperated. Who should she ask next, who would be a “safe bet”?

‘Next? Who is next?’ Miss Miller spoke sternly to silence the laughing five-year-olds. ‘Yes, Penelope?’

‘Miss? Miss? May I go next?’ Penelope’s little hand shot straight up the minute Miss Miller had said ‘Next?’ She was dying to tell the teacher her ambition.

‘Well, yes dear, if you really want to, I don’t see why not….’ Miss Miller sighed as she sat back in her chair.

Penelope stood up in front of her desk, her little hands clasped tightly behind her back.

‘When I grow up, I want to be a beautiful princess, and I want to live in a castle…’ Penelope beamed at Miss Miller, waiting for the praise that she was so used to. The teacher usually said things like ‘Excellent, Penelope’ and ‘Good girl’ to her. Sadly Penelope did not expect the reaction that was heading her way.

Miss Miller started to go puce again; she simply could not cope with another minute of this carry on.

‘Really Penelope?!’ she exploded. ‘I have heard quite enough of this nonsense today, sit down and come and speak to me at the end of the class…’ Miss Miller gasped; her patience had run out, she was completely exasperated at this point!

‘But Miss?’ Penelope answered back, in shock.

‘That’s quite enough out of you, now…’ Miss Miller warned her.

Tears welled up in Penelope’s eyes, it was the first time her teacher had ever been cross with her, and she did not like it one little bit.

‘…who is next? Tommy? Tommy, please go next.’ Miss Miller took another deep breath to regain composure. Tommy stood up.

‘Miss, when I grow up I would like to be a fireman…’ Tommy began describing the kind of things a fireman does.

‘Now that is more like it.’ Miss Miller thought to herself, the children had finally stopped fidgeting and giggling, as they all listened to Tommy.

At going home time, Miss Miller sat behind her desk with the two five-year-olds standing side by side in front of it. Both of the children were wearing their most angelic expressions, Penelope looked up from beneath her mop of fine blonde curls, and Alyx batted his extra-long dark eyelashes. Alyx looked bewildered, the poor little guy was used to going to school in France, and he was not used to the English ways at all. Penelope looked worried, she had never been in trouble before, and she didn’t quite know what to do with herself.

‘Now children I specifically asked you to prepare a future job that you would like to have when you are grownups, and Alyx… a Beatle, and Penelope… a princess, well they are not real jobs. Why didn’t you ask your mummy and daddy for help?’ Miss Miller’s tone was much softer now, but she tried to look as stern as possible hiding her urge to smile. The two children looked so serious… Alyx was shifting from one tiny little foot to the other, and Penelope was afraid to even look at him. Her nose was wrinkled up, and the teacher knew that Penelope was looking for just the right words to say… Penelope decided to get in there first.

‘But Miss, I did ask my mummy and she told me to ask daddy, and when I asked him… he told me to ask mummy, so I just did my homework myself.’ Penelope wrinkled her nose again, she just couldn’t understand what she had done wrong, but one thing she did know… Alyx was in so much trouble! She was afraid to even look at him in case it rubbed off on her!

‘Alyx, did you ask your mummy and daddy for help?’ The teacher turned to Alyx who was still shifting from one little foot to the other, looking very much like he needed to go to the toilet.

‘Yes, and my Dad told me the story of The Beatles… so I want to be like that when I grow up!’ Alyx could not understand why his teacher was so angry with him, and with Penelope too, she just wanted to live in a castle when she grows up… just like his granddad does.

‘Really! Children! What am I going to do with the two of you!?’ Miss Miller snapped, and then she paused for effect… ‘Alright, I have heard enough now, seeing as you both did prepare your homework you are not in trouble anymore… even if the results were a little… unrealistic..’ Miss Miller sighed.

‘Thank you teacher!’ the two of them chanted in unison.

Penelope was completely relieved; she couldn’t believe that she was going to be in trouble ! Her mummy would be sooooo angry.

Alyx turned to Penelope and said, ‘Pen-lopeee… my granddad lives in a castle, and sometimes I go there.’ Alyx was still shifting from one little foot to another, he was struggling to pronounce Penelope… it was a very big word for such a small person… He thought Penelope was so beautiful with her golden hair and her huge blue eyes; she always wore pink dresses to school.

Penelope decided, now that they were not in trouble anymore, it was safe to speak to Alyx… ‘Is your granddad the King?’ Penelope enquired matter-of-factly.

‘I dunno, maybe he is, I will ask him.’ Alyx shrugged his little shoulders, he had never considered the fact that his granddad could be the King!

‘Well… is your granny the Queen?’ Penelope stood there with her hands on her hips, speaking to Alyx as if he was a complete idiot! Secretly she was really interested now!

‘Well that’s what I want to be when I grow up… a beautiful princess and I want to live in a castle.’ Penelope was holding onto her dream, she didn’t care what any grownup said…

If you want to hear some more opinions of this book, take a look at the Goodreads, or even get yourself a copy from Amazon*.  Also make sure you check out the rest of the tour below!