Honestly, the one thing that’s been putting me off reading this book for so long was the ridiculous price of the American import. Once i found out that More Happy Than Not would be getting a U.K release, i was thrilled i’d be able to read this book much cheaper and start with Adam’s debut novel.

After getting tickets for Becky and Adam’s event later on this year, i figured i should start reading his books and getting to know a little more about his writing style. All i knew that his books were contemporary and usually pretty sad. I was completely right. 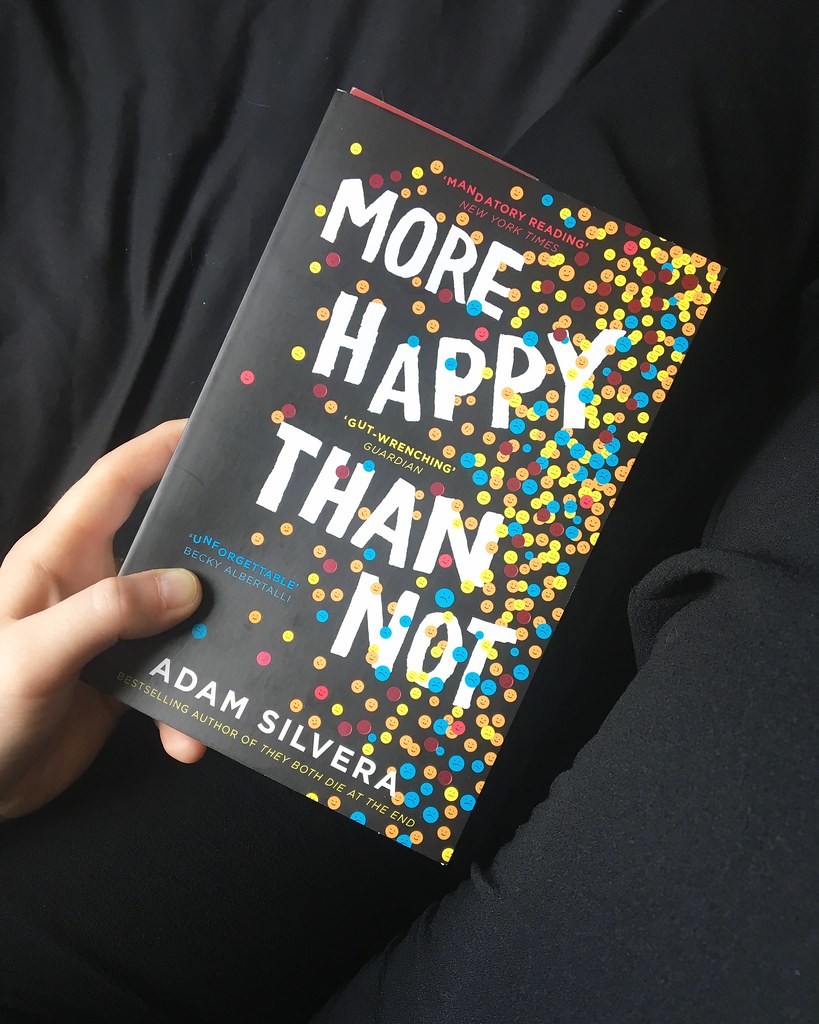 Although i really loved this book and found it different, it was painfully upsetting. Right off the bat it discusses self harm, suicide and mental health issues. I really do love fiction books that discuss these topics because it spreads awareness, however i was not expecting so much detail of these topics right at the start. They are also splattered through the book, which admittedly i found it pretty hard to read to begin with. The constant mention of suicide was a little much for me to deal with in a contemporary book.

Saying this, it was a pretty easy read all in all. The characters were memorable, easy to follow and so were the characters lives. I really loved the protagonists and the struggle with the sexuality, but not in the ‘normal way’ (i’m trying to talk about this without too many spoilers) and i loved the little twists that were written in to the story that made it just slightly abnormal, it gave the story a little body.

More Happy Than Not had elements of dystopian science which i really enjoyed. It made the book really stand out from other contemporaries that i’ve read recently, and more over, it stood out from LGBTQ+ fiction that is out at the moment. This story truly felt like a character that happened to be gay instead of a story about a gay character. I think the rest of Adam’s books will be similar and that is one aspect that i’m most excited about.

The best thing i’ve found with Adam’s books is his writing style. It’s so easy yet profound and really enjoyable to read. The best way i can describe his style is smooth. It just glides past and before you know it you’ve read half a book. He integrates different writing styles in to one, such as flash backs, really easily and i enjoyed seeing the differences to his writing for the first time.

There are a few elements to the book that i found a little confusing or i generally didn’t like, but overall there were very few flaws to this novel. I found some of the themes as i said, difficult to read – especially as i generally enjoy reading those themes, these were just a little too much for me, slightly too heavy. I imagine many people will feel the same way. Some parts of the story are not explained in great detail, which also made me a little confused with what was happening, but i managed to pick it up pretty quickly afterwards.

It’s difficult to review More Happy Than Not without spoiling it or giving some kind of the plot twist away, so i apologise for how bad this is. However i really do advise that you pick up this book (maybe even with the new shiny cover) and see for yourself how wonderfully Adam’s writing is.

Be warned that there are strong themes of suicide, depression, self harm, mental health and family loss in this book. It may be a difficult read.