Long time no see! I’ve had a ridiculously busy few weeks – straight after YALC weekend I had three days of interning, work and then a five day trip to the Peak District! Though busy, it has been a brilliant time spent with close friends and I feel tired but also refreshed and happy from being around books, bloggers and authors to being around nature and away from the internet altogether! Now I’m back and ready to tell you all about my YALC weekend! If you haven’t read Sarah’s already, here it is.

Just like Sarah, I will be doing my YALC haul on a separate post. I got a lot of books and I’d like to go through them and why I bought them/why I’m excited to start reading them. Here, I will go through my highlights of the weekend and what I got up to!

I wasn’t able to go to YALC last year because of money so I had spent two years waiting to do the full three days! It was definitely worth it. My biggest highlight was definitely spending time with friends. I felt so happy to have such a great group with me and to spend a few bookish days with my best friend and blog partner, Sarah, was wonderful! Friends and books – what more could you ask for? Walking round the stalls at the convention centre, meeting authors, attending talks and waiting in queues with good friends was just brill. As well as this, me, Sarah and Charlotte (WonderfullyBookish) stayed over for three nights nearby so we had fun hanging out and playing Bananagrams (a great game) together along with our friend Lois (LoisReadsBooks). 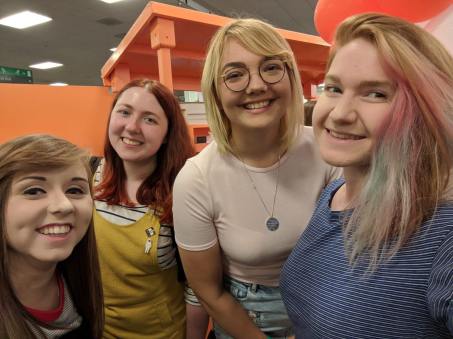 I did at first plan on going to quite a few workshops but to be honest, I ended up just doing the things I really wanted to do and what I felt like doing in the moment. I made sure I knew what was on each day and attended everything I wanted to. The only thing I missed out on was meeting Tomi Adeyemi – she had a huge virtual queue and spent a good amount of time with each person. I heard she was so lovely and although I didn’t get to meet her, I’m really glad she was so generous and wonderful to the people who did get the chance! That makes me so happy to know. 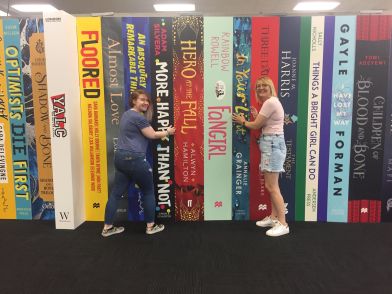 I got to meet some of my favourite authors either for the first time or again. The FLOORED workshop was wonderful and I adored every minute of it. It was so funny and we created a ridiculous dinosaur version of FLOORED. Big thanks to Melinda Salisbury for being one of the only people to appreciate my puns (Dinofloored) and not groan at me! Honestly though, we were all laughing so much and it was so fun! Every author of FLOORED was an absolute gem to talk to and it’s such a privilege to get to meet and chat to such kind and talented humans.

I also got to meet Akemi Dawn Bowman and Alice Oseman again since we interviewed them a couple of months ago. This was definitely a highlight as they are both such genuine and kind people and have both written two of my favourite books! I also got the opportunity to meet Charlie (CharlieinaBook) from Stripes Publishing again – I first met her at the Change is Gonna Come event in Manchester last year and we have spoke on Twitter since. We are a big fan of Stripes Publishing and seeing the PROUD cover revealed was super exciting! I can’t wait for that book to be released. It will probably/most likely/definitely feature at our LGBTQ+ Book Club…

The YALC quiz with two teams of authors and the radiant Katherine Webber hosting was such a fun time. Honestly, I wasn’t quite sure what to expect but it was just hilarious and everyone joined in so well. I think as a group we did all scare off Jason Momoa as he came up to our floor for the hundredth time that weekend but there was a team named after him!

I have so, so much more to say about the weekend and I will be writing more posts about it. I had the absolute best time and I would love to go again next year! The plans will be starting soon. I wish I got chance to say hi to more bloggers but I am a little anxious! If you recognise me, don’t hesitate to say hello! I’m trying to pluck up the courage to chat to more people in the blogging community. What were your favourite bits of YALC?

2 thoughts on “YALC Round Up – Sophie”