I have had Trouble on my shelves for a long time now, and as this is my third year of YALC and adoring Non, i felt like it was finally time to actually read one of her books. I’ve heard a lot of mixed reviews of Trouble, but i wanted to find out for myself what i thought. 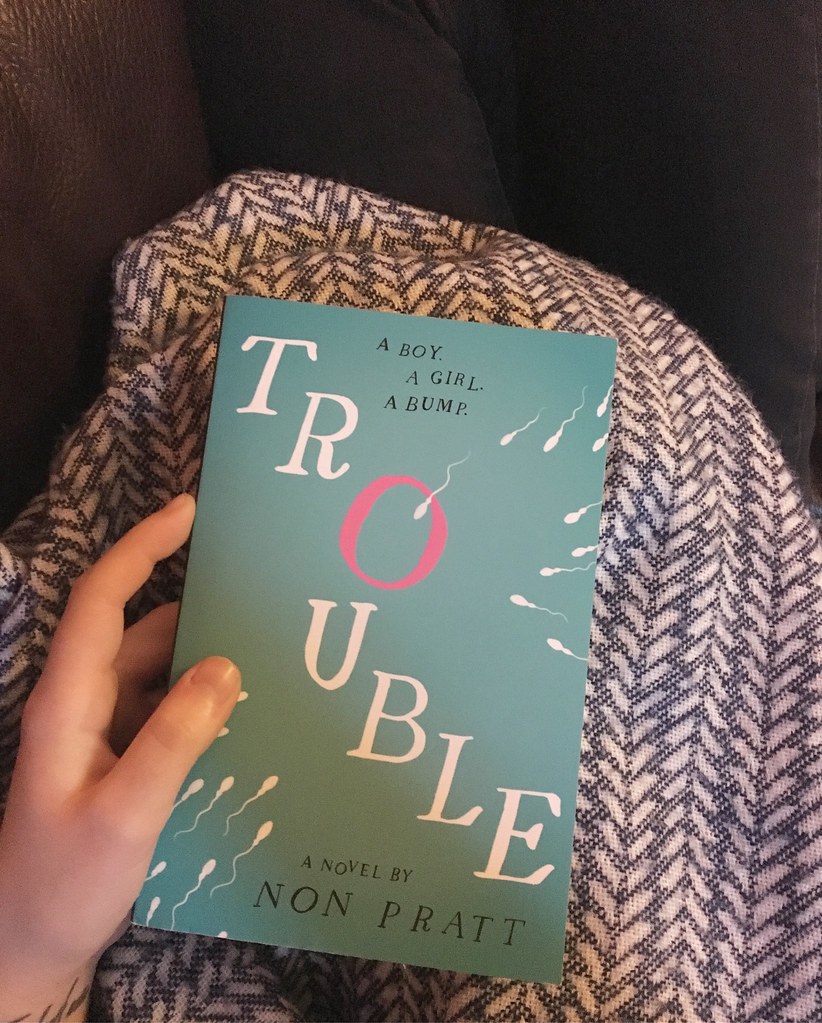 I knew the premise of the story was that Hannah found herself pregnant, and the new boy at school Aaron became her friend. The thing that interested me most about this book is that it’s YA and did not involve relationships at the centre. Trouble follows Hannah and Aaron’s friendship as they grow closer and support each other through some of the most important times in each of their lives.

Thankfully, this is just what i wanted. Although there was a little dip in the middle where i became wary that Aaron would be attempting to start something with Hannah, it turned around quickly and continued their friendship. I really loved this focus of the story and Aaron and Hannah’s friendship seemed very genuine to me. It felt like real British teenagers stuck in situations they didn’t want to be in, but making the best out of who they’re stuck with. They turned in to almost a brother/sister relationship, which i feel is very true to the relationships you make with people you meet when you are fifteen.

I also really enjoyed the plot twists to this story. It’s told duel perspective of Aaron and Hannah, and at first i thought Aaron’s perspective would be filled with information about Hannah and just his relationship with her. However, Non wrote Aaron excellently. He had his own back story (which was believable even though a little dramatic) and i really ended up enjoying his parts to the story.

Similarly, i really loved Hannah’s parts in the end. At first i found her difficult to connect to, maybe that was a sign of the age gap between me and her, however i loved her family dynamic and the focus on her relationship with her family. Trouble truly showed the reality of being a teenager in a difficult situation but still wanting to be yourself.

There are very few aspects to this book i disliked. Although i found the protagonists a little too young, this is definitely something that is my own personal issue and nothing to do with the book. I really loved the story and the characters were likable enough. I didn’t really relate to any of them though. One thing i really loved was the easy writing style that Non has. I found Trouble so easy to follow and i flew through a sitting of it. It’s definitely a talent to be able to write that effectively but with a lot of simplicity.

I really did love this book, however i have scored it a semi-low rating. This is only because it was a little too young for me. I’m sure i would have adored this eight years ago.