*A big thanks to a pal Kimi for letting me read her advanced copy of this book!*

For any of you who are new around here, i absolutely adore the entire Fletcher family. Every single one of them. Having read every book that Tom and Giovanna have released separately now, i thought that Eve Of Man would be my absolute dream book. I wish i hadn’t have found it so ‘meh’. 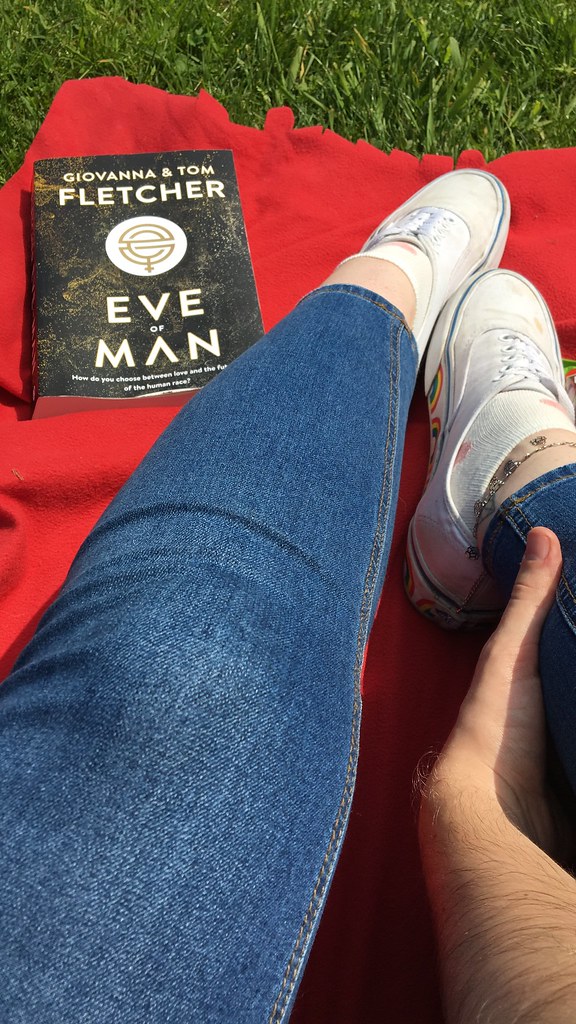 n case you’re unaware, Eve Of Man is the story of Eve, the first girl to be born in the world in fifty years. Obviously her birth causes a lot of uproar and quite a bit of protection towards her, leaving her kept away under the water of the government and ‘mothers’ that take care of her. She has some luxuries, obviously, but nowhere near a ‘normal’ life.

The story itself to me sounded interesting, and it was actually pulled off very well. It is split in to two voices, that of Eve and that of Bram (her love interest and a worker in the world they live). There was a lot of explanation for the world they lived in, the sci-fi elements were done incredibly well, and the characters (although sometimes a little dry and lacked personality) were likable. I do want to clarify i think i judged the characters a little prematurely because towards the end of the book, in the last 100 pages or so, they really came to their own and i ended up liking them a lot more than i thought i did.

As i said, the build of the world was actually very clever. You can tell that Tom had quite a lot of say in the technology of the world and how things ran. It was detailed and really easy to understand for some pretty futuristic stuff. However, i had a little bit of a problem with the timeline of this book. Without a doubt if we’re talking fifty to sixty-five years in the future from now, technology would not be as advanced as they’re claiming to have. I also don’t know how rapidly the state of the world declined after only boys were starting to be born, but that seemed a little extravagant to me too. So apart from the little off timeline, the world building was great.

Now the characters, i mentioned that i found them to be a little dry, particularly Eve, however as the book progressed i noticed hints of her personality as she was less controlled by others. She started to become a likable and pretty bad-ass character, and i started the anticipate her chapters. Bram to me had a little more substance to him, which i liked from the start. Truly though, the side characters of this book completely made it for me. Hartman is still my favourite character and was from the start. He’s likable, down to earth and without a doubt was not given enough time to have his character developed. Frost became  favourite and so did Chubs. The Mothers that were carers of Eve were also characters that you grew to love more and more in the book as their personalities came out a little more.

Now a few things that i found really difficult about this book (aka things that lowered the rating). There is no diversity, or obvious diversity. Admittedly, you don’t have to mention the race or background a character comes from, but in a book like Eve Of Man where it is completely reliant on characters, it would help to not imagine them all as white males (mostly, most of the characters are male). It was a little off putting and with the strong development in YA diversity at the moment i felt a little let down when a character of a different race could have easily been put in this. I also found the male/female divide incredibly uncomfortable for the first two-hundred pages. I can understand why males and females would have to be divided in a world like this, but the way it was written admittedly felt a little like rape-culture to me. You can include it in the book, and it would make sense to, however it felt incredibly heavy for the start and as i said, made for an uncomfortable read. It didn’t portray males in a good light at all, and made you only trust Bram and Hartman, which was not positive at all.

Overall i did enjoy the story of this and as it picked up and there was a little more action towards the end, seeing where it would actually be going felt like a relief. There was quite a lot of unsure feelings about where this story would end up for the first book in a trilogy, but it paid off by the end. I’m definitely looking forward to the next installment, whenever that will be. For a first time YA novel for these two, i was really impressed with the writing and some of the topics that it covered, but not necessarily thrilled with absolutely everything.

3 thoughts on “Eve Of Man by Giovanna & Tom Fletcher”