I figured that i’d have a good reading month in April, it has been the start of YALC TBR’s and honestly a lot of panic about what i’m reading up until July. I wanted to spend a lot of time on my YALC TBR and make a good start this month, however with book club and our first proper pick of book club being April, i think i had less time than i anticipated. 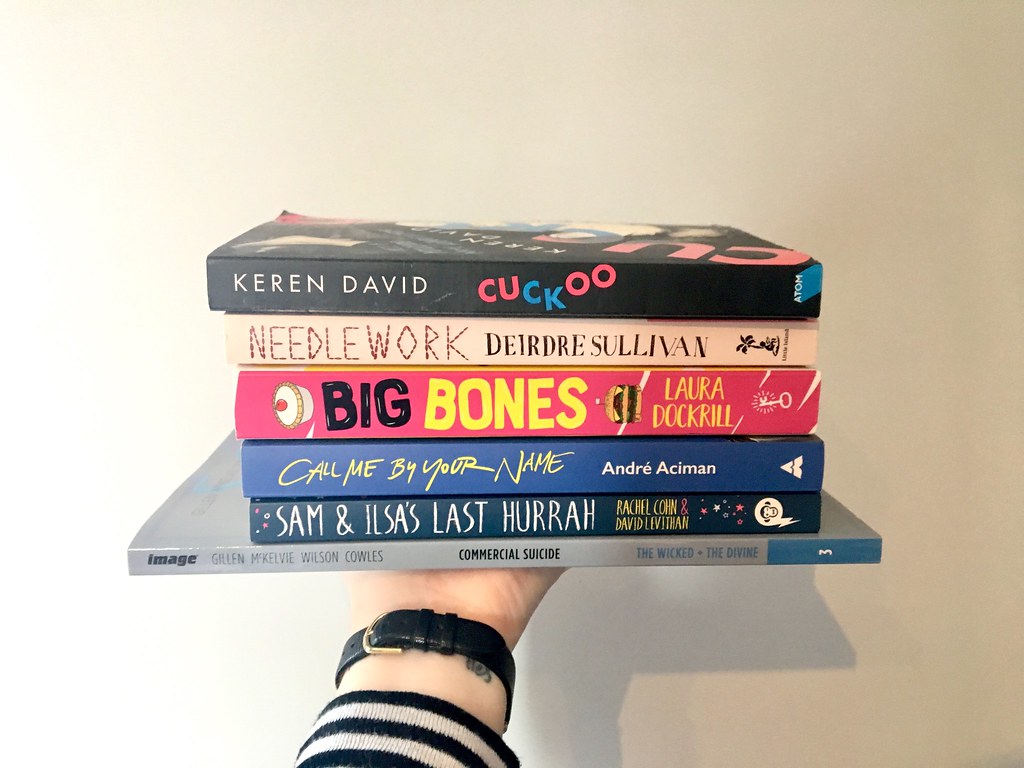 Sam & Ilsa’s Last Hurrah by Rachel Cohn and David Levithan
I received a copy of Sam & Ilsa from the publisher in exchange for an honest review. David Levithan has always been a favourite author of mine and i’ve enjoyed his colabs with Rachel Cohn a lot, so i knew i wanted to get my hands on an early copy of this. I have a full review up HERE if you want to know my full thoughts on it. I did enjoy the characters a lot, but i had a few issues with it that just took me from the story a little. I explain a little more in the review about that, but it was enjoyable even though it took me a little longer than i wanted to actually read it.

The Wicked + The Divine Volume 3: Commercial Suicide by  Kieron Gillen and Jamie Mckelvie
I’d been craving a graphic novel to read for quite some time, and i had a free afternoon that allowed me to actually just sit and read one in one sitting. I’ve been meaning to catch up with this series for a while now as i adored the first two in The Wicked & The Divine series. Now that they’re up to volume six i might have to spend some YALC time catching up in the next few months.

Needlework by Deirdre Sullivan
Once the YALC authors started to be announced, reading started to be a little more manic. Luckily, the day before Deirdre was announced for the event, i had picked up her book on a whim. I wanted to read it straight away after seeing the four and five star reviews that it was given, and Needlework didn’t disappoint at all. I loved to hate the characters, it was deep and meaningful and full of important quips about life that most people could appreciate.

Big Bones by Laura Dockrill
Big Bones was my first read from Laura Dockrill, and i’ve been wanting to read something by her for a very long time. When Big Bones was released i knew this would be the perfect place to start with her writing. In short, i loved it. There were very few aspects to this story i disliked, and her writing was incredible. I have a full review HERE if you want to know more about this story, but without a doubt i think you all need to read it.

Cuckoo by Keren David
Keeping on the theme of YALC authors i picked up Cuckoo by Keren David. I’ve had this sitting on my shelf for some time now and honestly have barely thought about picking it up. It was sort of a throwaway book on my YALC TBR that i wasn’t bothered about reading. It turned out to be an incredibly fast read with it’s script-style writing and i liked most of the characters. Jake’s family kept me interested in the story, but for me it was a little too far-fetched and just not what i was looking for from this book.

Call Me By Your Name by Andre Aciman
Call Me By Your Name is our April Book Club pick for the month, so really it had to be read in April! Although this took me quite some time to read in the end, i actually enjoyed it a lot more than i thought i would do. I had absolutely no idea what to expect going in to it, but it was very sexual, very wordy and generally a very nice story about growing up in love.