Big Bones is the first book i’ve read from Laura Dockrill. I’ve heard a lot about her work and wanted to read something by her for a long time. When Big Bones was released i thought this would be my perfect introduction in to her work. I was not wrong at all. 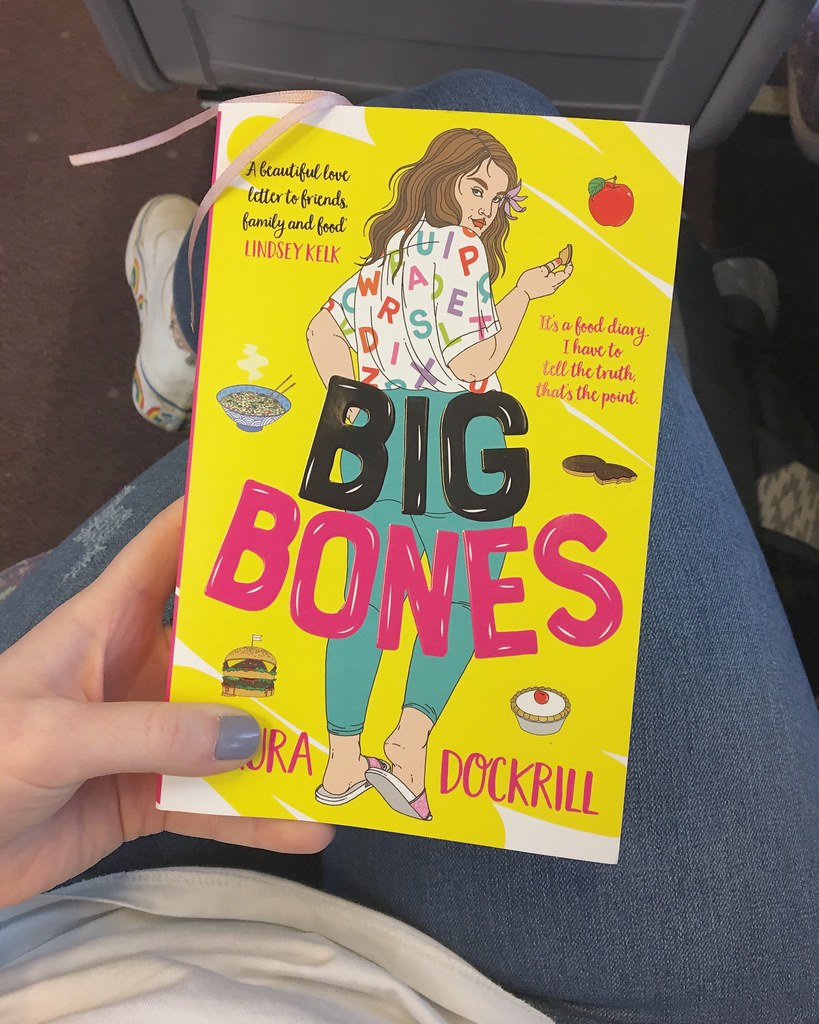 Big Bones is the story of Bluebell, BB or Blue if you will. She’s a teenager, she wants to quit school, and she’s fat. It seems a little contemporary doesn’t it? It’s not. The one thing i was a little wary about this book being was cliche, and it’s so far from that. Bluebell is sixteen and has just done her GCSE’s. She doesn’t want to go to college, she wants an apprenticeship and she wants to live in the real world. First of all, i don’t think there are enough books that focus on teenagers like Bluebell. As the age for staying in education has highers, there’s such little light shone on those sixteen years olds that want to move away from education. This was a really great insight in to someone who isn’t necessarily bad in school, she did okay, but just wants to live in the real world. Honestly Bluebell is extremely average, and i loved that.

The rest of the characters in Big Bones were pretty average too, and that’s what worked. Her family is made up of her sister, mother and father who i’m going to suggest are a very rocky relationship from the amount of moving in and out her father does. There was one scene in particular in this story where her mother became a real mother for me. She acted as a mother that anyone could relate to, and i loved it.

As you can imagine from the cover, the main focus of this book is food. Bluebell is overweight and it’s said right from the start that the focus of the book is going to be getting her to lose weight. She is given a food diary by the doctor to complete and also has to join in gym in a deal with her mum. I related to teenage Bluebell so much in these aspects. As a very overweight teenager myself, the odd chapter where Bluebell would just describe some kind of food, honestly spoke to me on a spiritual level (i was actually reading this on a three hour train journey and i was so hungry by the end of it!). These chapters gave the reader an idea of what makes Bluebell tick, and i loved that. It captures the addiction of eating in a very real way. Even though it feels as though Bluebell herself does not have an addiction.

Big Bones also deals well with the mental health issues that come from overeating and being overweight. A lot of my insecurities from my teenagerhood came from food, and some still do, however Bluebell is extremely confident (something i wasn’t) and she adores herself, which is great to read. However there are comments to her being wary people are looking at her and judging her and a little bit of paranoia. That was a really great touch that normalizes those thoughts but also shows that you can be confident and happy with yourself.

I could probably gush about this book continuously and go on and on but i’ll leave it here. I didn’t expect to love this book as much as i did, and love the characters as much as i did. And hurrah for a YA book where the love interest takes a huge back seat! I cannot wait to meet Laura at YALC this year after reading this book.