As most of you know we announced our LGBTQ+ Book Club a few months ago, and that it will now be held once a month in a cafe in Manchester. In March we had our first book club night (after a lot of snow fuss) and it went really well – you can see the post HERE. on the 4th of April we had our second evening after setting Every Day by David Levithan to read. 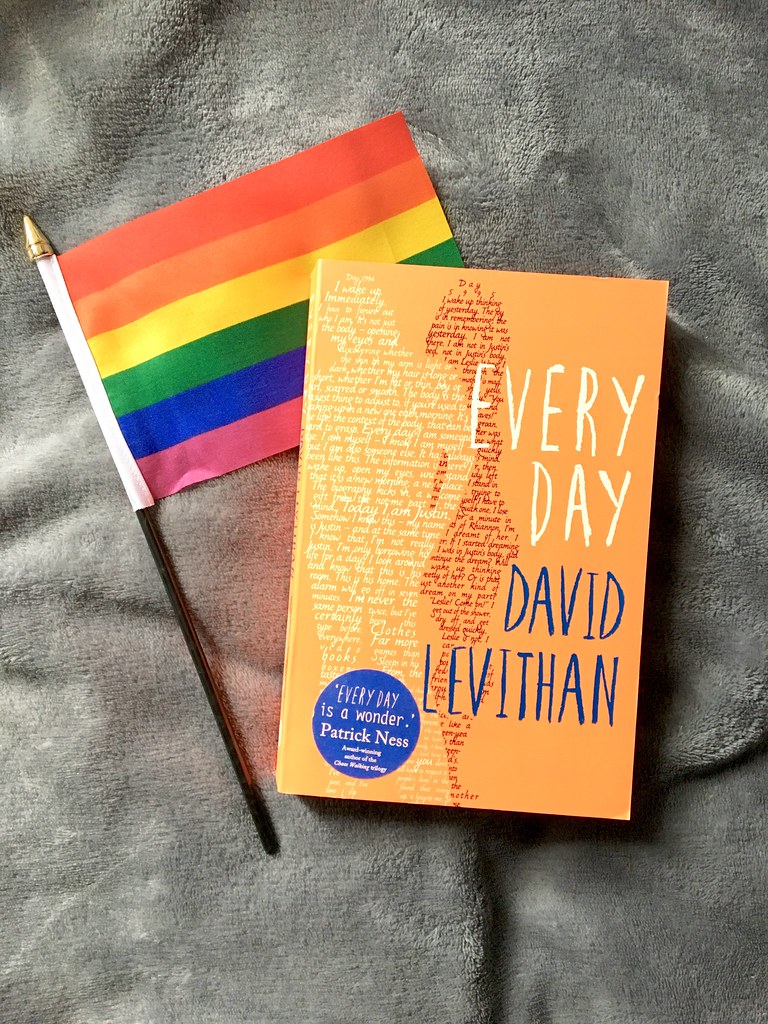 his post will contain spoilers of Every Day – more info about next months book club at the end.

For most people attending (including me and Sophie), Every Day was a re-read. We wanted to choose Every Day because when we first read it quite a few years ago now, we both never picked up on any of the sexuality or gender aspects of it. Mainly we wanted to find out if other people picked up on it.

First of all, the night was really great. We had a good turn out of friends who have read the book and were ready to discuss their views on the characters. It was a really lovely evening and just what we imagined the book club to be like.

I want to talk about book club, but i also want to talk about my feelings on re-reading Every Day and everyone else’s thoughts from book club. I had very mixed opinions whilst re-reading the book. When i first read it, it was a solid five star book for me. I really enjoyed the story-line and really loved the premise. When i re-read it, i still found that i love the premise of it and the entire entity of the protagonist, A, but the story i liked a lot less.

For anyone that is unaware, the story follows A, an entity that is not male or female and does not specify a sexuality, who jumps body from teenager to teenager each night. They spend each day as someone else which allows them to experience a lot of lives with a lot of different people. Each chapter is A in another body and is focused on that person. The main story-line is of A meeting a girl called Rhiannon and falling in love with her, and all the issues that would come with this.

As i said, the premise of the story that A changes bodies every day really interests me. It’s a completely new story that (to my knowledge) hasn’t been written before. But with that new story comes a lot of issues. Away from the sexuality and gender aspects of the story, i found a lot of plot holes in the sci-fi element. For example A says that they cannot move from the city that they are in and all the teenagers that are ‘taken over’ for the day are in the city radius. There’s absolutely no explanation for this and throughout the whole book i couldn’t help but think why. Why would that be such a strong rule when it’s literally an entity taking over bodies each day. There were a few other issues i had about age etc, however the one thing i thought would explain this was something that we discussed in book club; representation.

Upon reading Every Day a second time, i found that i was considering A to be a representation of something opposed to being a separate being. If i focused on them being a person of some sort, this book made no sense to me anymore. However if i thought of A being a representation of non-binary, pansexual or a-gender, this made a lot more sense to me. I don’t have an answer for what i think A is a representation of, my best guess would be something gender opposed to sexuality, but it makes a lot more sense to consider A to not be a human or some being similar to a human. Especially with the aspects of them not understanding relationships properly or day to day life. A can access information from a person but obviously that information would change day to day. Meaning surely by sixteen they would be aware of a lot of life issues and social norms. However A seems very unaware of that – more reasoning for me to think they are just a very stand-off representation of non-binary.

One of the things that bothered me a lot during this re-read was A’s relationship with Rhiannon. When reading it the first time, although i disliked Rhiannon, i really loved their relationship and i wanted them to be happy together. I could never understand why Rhiannon wasn’t completely interested in A if she said she loved them. Re-reading it, i released that A is incredibly forceful and somewhat of a stalker towards Rhiannon. In one scene they specifically pretend to be a gay man in order to be able to touch her without raising alarms. This is so incredibly problematic and i’m amazed that i never picked up on it first of all. I know that this is desire from A for never being able to make a connection with someone, but having all the world knowledge they claim to have, they would have known this act would be wrong. The whole relationship seems incredibly inappropriate to me. My main issue with it (which does link to sexuality) is that A cannot understand that Rhiannon is not attracted to A when they are in a female body. There is a lot of forcefulness in these scenes that is actually quite uncomfortable to read. Rhiannon as a sixteen year old most likely knows her sexuality, and shouldn’t be pushed in to kissing someone in a female body if she identifies as straight. This is just one of the qualities of A that i grew to not stand.

Something that someone pointed out again at book club is that A seems to never want Rhiannon to be alone. And i never thought about this until that night. They didn’t want her to be with Justin, just themself, and at the end of the book when it’s realised that would not be easy, A finds someone else for Rhiannon to be with, forcing her again on to someone else that she doesn’t even know. I really disliked this during the re-read and found the ending to be incredibly uncomfortable. However it was pointed out that A feels incredibly alone in their life with no stability to turn to, they never wanted Rhiannon to feel the same. As teenagers i imagine they both thought this was the biggest thing in life; love, and didn’t understand that there are other wonderful things. This was a point that i later found that i sympathised a little with A.

I spent a lot of time being angry with A. I never felt sympathy towards them because they were acting like a teenager who was unable to get what they wanted, even though they should be aware of social norms. My views on this changed a little at book club when one person (the only person who thought this) pointed out that they did feel a lot of sympathy for A, not matter what they’d done. If you put A in to the body of a human being, a normal human being and exposed them to the mass amount of change that A deals with, i’m sure most people would have sympathy. A never has a stable home, will never have a relationship with anyone, will never have a body to learn to love or hate and will never experience the form of friendship with someone. They are thrown in to the middle of lives continuously and are not able to make any connections. So once i thought about this i realised i do probably have some kind of sympathy for A and understand the intense feelings of latching on to Rhiannon so closely.

There are many questions i have about the book that would only be answered by David Levithan himself. I would love to know if this book is written just about the idea of A as an entity or was actually written to teach a YA audience about gender and sexuality. I think you need to really look at the book and think about it to be able to pick out some of those points from it. We all agreed at book club that we picked up on these four years later because we are older and more aware of gender and sexuality, so maybe this is a book for an older audience and we didn’t realise it.

There are many more aspects of this book that i want to talk about, but this post is about to get very long. Overall it was a really great night and we got a fantastic talk going  about this book. Hopefully we can do the same next month.

So the next LGBTQ+ Book Club will take place at Chapter One Books in Manchester on the 3rd of May 2018 at 7pm. We will be reading Call Me By Your Name by Andre Aciman. It’s a very popular story at the moment and i imagine we can get some very good, relevant conversation about it on the night. Grab a copy of it and come join us!