*I received a copy of Sam and Ilsa’s Last Hurrah in exchange for an honest review*
I’ve been excited for this book to be released for a while, as many of you may know, i absolutely adore David Levithan and his co-written books with Rachel Cohn are always an easy read with wonderful characters. I’m very happy to say that this one was no different. 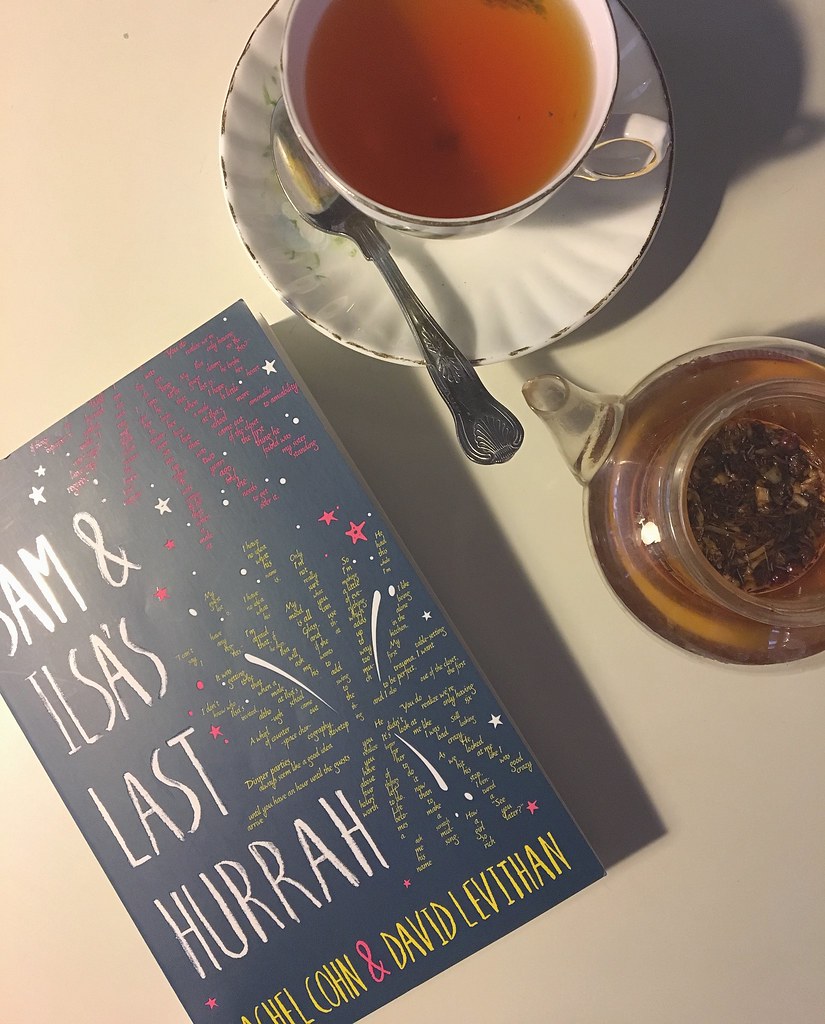 I didn’t know much about this book before i actually started to read it. I knew it was about a brother and sister team who host an end of year party for their friends or acquaintances, but that’s about all i knew. The one thing i love about these authors writing together is that most of their books are written over a very restricted time period. One day or one night, and i really love that with YA that these restricted times work so well. Sam and Ilsa’s… is based over one day, just the evening of the party, and i loved that about this. It was a snapshot of the characters as they are now. Very little back story, and very little information about each character is given to the reader, and it was interesting to see how Sam and Ilsa interpret those characters in the moment.

As this book is character driven, i wanted to talk about the characters a little more in depth. The idea of these dinner parties is that Sam and Ilsa invite three people each, and the other will not know who these people are until the night of the party. A very interesting concept – as i said, this makes you feel like you’re meeting the side characters with Sam and Ilsa. Whereas i really did like some of the side characters, Li for example is one on my new favourite YA characters, some of them i found to be a little too extravagant. One of the invited people had taken to talking through a sock puppet, which i found strange for a sixteen year old, and KK (the rich socialite) was just a little too much for me, very stereotypical. However Parker (Ilsa’s ex) and Johan (Sam’s upcoming love) were very well crafted. They showed sides to Sam and Ilsa we wouldn’t have had other wise and gave a good back story to both of the characters. They were also not too extravagant and were definitely likable.

Also as most of the books by these authors, it involved some LGBT representation. Sam is gay and also Ilsa seems to come out mid-book which i was very surprised at. Sam being gay was introduced as normality in the book and there wasn’t a big reveal, which is what YA is lacking in. Also Ilsa’s relationship with another character in the end showed a more positive aspect to a lesbian relationship that is definitely needed more.

I appreciated the alternating chapters (as always in Levithan & Cohn books), however an addition that i don’t remember reading in the previous books was the “ten years later” chapter at the end, that was from both Sam and Ilsa. It was really nice to revisit these characters in some way, and as the story is about growing up and moving on, it was a great idea to show where these characters had ended up years later. It was a very nice addition and i would really love a story about twenty-five year old Sam and Ilsa finding there way in New York City again.

Overall, i did enjoy this book, but there was something that didn’t fully sit with me. It was an easy read but something was missing. The characters were good, and the pace was good, i think i just needed more from Sam and Ilsa. They easily became my favourite people in the story by the end, and i want to know more about their relationship with each other instead of their relationship with the other characters now.