After my average reading month in January i really wanted to pick up the pace a little in Feburary and start meeting my reading challenge targets. Sadly that’s not really happened. I’ve read enough to make me feel as though i’ve been productive, but not enough to make me hit those targets. I’m using my birthday and a holiday as a definite excuse for this behaviour. Next month i’ll have to read plenty of short books i think! 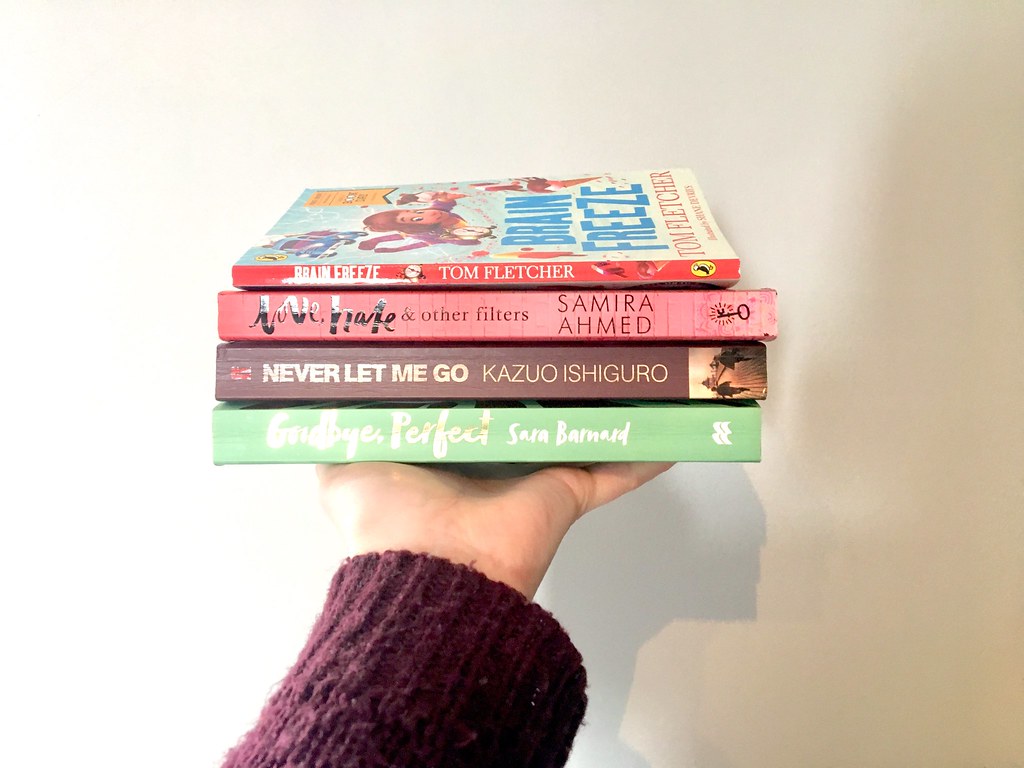 The History Boys by Alan Bennett
The History Boys is a play by Alen Bennett, meaning that the book is just the screenplay of that theatre production. Later it became a movie. I have been obsessed with that movie for a long time, i love the characters and the simplicity of it. I’ve wanted to pick up the book for quite a while. As assumed, it’s exactly the same and reads as every other script would. I enjoyed it and ended up reading it in once sitting. However, i found reading it much more complicated due to the amount of male characters there are and names flying everywhere.

Never Let Me Go by Kazuo Ishiguro
Reading Never Let Me Go was first on my list of ‘books that people love i still need to read’. This is my partners favourite book and i picked it up early on in the year because it’s been sat on my shelf for an incredibly long time. It’s the first book that i read by Ishiguro and i really enjoyed the emotive dystopian story. I’ve never read anything of the sort before but i really enjoyed it. I did find it a little descriptive in parts and that put me off, but overall i’m incredibly happy i ended up reading it.

Goodbye, Perfect by Sara Barnard
I’ve been anticipating GoodBye, Perfect for a long time (since YALC approximately) so when it finally got released i jumped at the chance to read it. Previous to this i’d only read A Quiet Kind Of Thunder by Sara Barnard, and i ended up loving Goodbye, Perfect just as much. This follows a young girl who runs away with her teacher, which obviously forms quite a frenzy with the media. It felt quite realistic to story and dealt with topics such as grooming which are prevalent in media at the moment.

Love, Hate & Other Filters by Samira Ahmed
Love, Hate & Other Filters has been one of the most hyped YA novels recently, so i automatically had high expectations of it. I was looking forward to the topics that it discussed and seeing how the author dealt with the hard hitting story-line. I was surprised about how little the topic of terrorism was actually in the novel itself and felt a little uneasy about how much of a teen romance it turned out to be. I didn’t love this story as much as i expected it to. My full review will be up soon.

Brain Freeze by Tom Fletcher
Brain Freeze is the latest story by Tom Fletcher that was released as part of the World Book Day celebrations. I got ahead of World Book Day and read this right at the end of the month, last minute. I love Tom’s stories, although they’re middle-grade i find them very amusing and wonderfully written. I really enjoyed this short he created and the illustrations as usual were incredible. I cannot wait for more from Tom in the future.

I also started Perfect by Cecelia Ahern this month, i’m currently about half way through it. I’ve been waiting to read this for a long time now as i was obsessed with Flawed when i first read it. Hopefully i can get this finished pretty quickly.

Most of the reads that i got around to in February were average reads for me. I enjoyed them but didn’t love them and i didn’t find my new favourite book this month (still waiting for that to happen, i haven’t fallen in love with a book for a long time). Let’s hope next month is a little better and there’s more read!