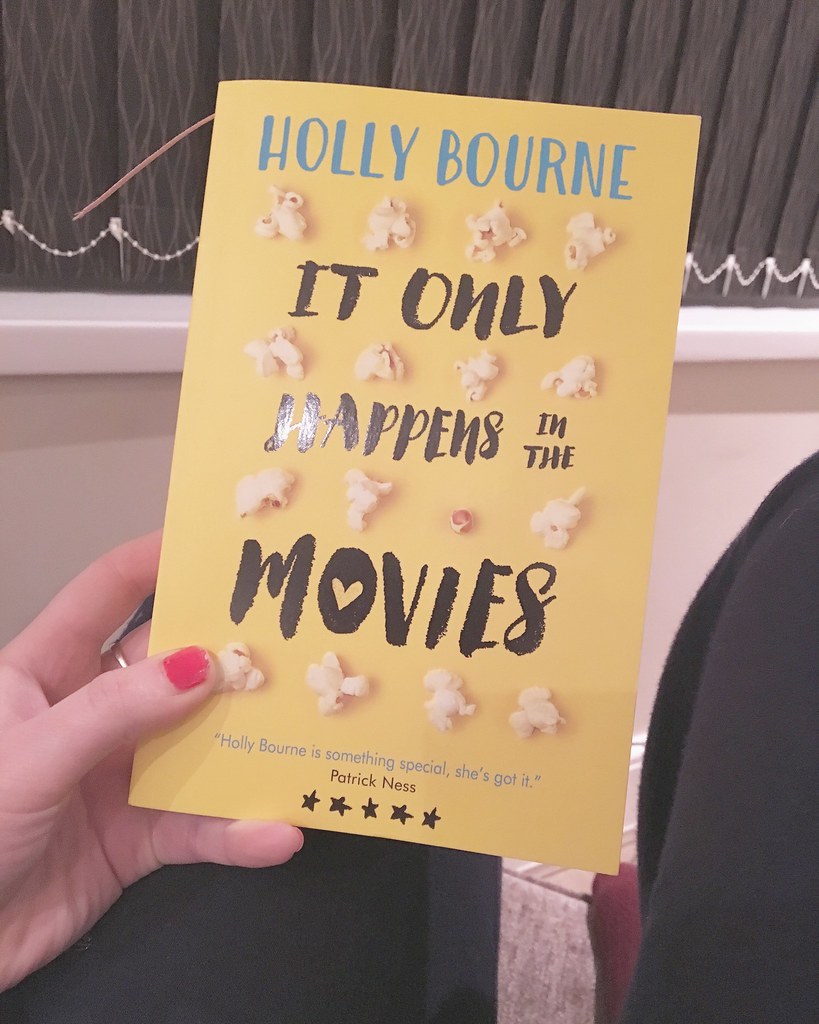 Title: It Only Happens In The Movies

Summary: Audrey is over romance. Since her parents’ relationship imploded her mother’s been catatonic, so she takes a cinema job to get out of the house. But there she meets wannabe film-maker Harry. Nobody expects Audrey and Harry to fall in love as hard and fast as they do. But that doesn’t mean things are easy. Because real love isn’t like the movies…

It Only Happens In The Movies is my first experience of Holly Bournes writing. I never have been interested in some of the more ‘famous’ releases of hers, but something about this yellow cover intrigued me. I wanted to go in to this novel completely unaware of the summary, so i kept myself away from Goodreads reviews and avoided the hype at YALC this year in order to be surprised.

Although i knew nothing, i was surprised about this novel. I wasn’t expecting it to be so ‘romance-heavy’, and although i enjoyed the romance, i came to realise pretty quickly it is not really my taste in YA anymore. I found it to be a little too cliche (even though i’m pretty sure a lot of these cliches were made on purpose), and that put me off a little. However, i did find this story absolutely hilarious. Some of the one liners that are written in here are pure genius and it had me laughing out loud every few pages. The writing is the perfect amount of teen-angst to not make a twenty-two year old (me) feel out of the loop, but enough to make me a little nostalgic for the thoughts and language of a seventeen year old.

I will say that i very deeply connected to Audrey, the main character. It has been a veyr long time since i connected with a female character in YA this much. The novel focuses on her worries about so many different things in life. Her family life falling apart, new loves, sex, old loves and so much more that is going on in her life. I feel like this character has come in to my life at the right time when i needed it to feel a little less alone. A lot of the struggles in the novel are things that i can identify with, and i have seen so many people saying the same thing. I think that’s a massive credit to Holly who created such a raw, likable and relateable character.

Also this seems to stem from the fact that Audrey is a little older than some of the YA characters around now. There seems to be a trend in which authors are writing characters in between the YA and NA ‘age ranges’ (i hate that term), and they seem to all be well received as they fit in with a lot of people in this community. Audrey and most of the other characters in this novel seem to be of a similar style, and i very much enjoyed that.

I did enjoy the easy writing of this story, however my big downfall of it was the fact i just did not find some of the story interesting. I found a lot of the story of Audrey’s family very interesting, and i would have loved the novel to be even more centered around that. However a lot of the film related scenes i found tedious. I don’t know if it was because (Audrey’s love interest) Harry’s friends i found annoying and irrelevant to the story. Or the fact it was very zombie based that i did not have any interest with at all. During those scenes, it felt i was reading something from a few years back in YA, and it was strange to have that throwback mixed in with what i found a very progressive book for YA.

Overall i really did enjoy this book. There were a few aspects that i have knocked a star or half a star off in my rating for, but i enjoyed the ease of the writing style and the easy to follow story line. I would have loved more from her actual school project, and from her friends, but that would have shifted the focus and the point of the story most likely. I’d recommend it to anyone who would like a quick contemporary read with a little bit of romance-excitement.