I feel like I’ve been waiting months and months for Wonder to be released. Back in the summer, as I was highly anticipating this movie, I picked up the book ahead of time. I knew that Stephan Chbosky was set to direct the movie, and as one of my favourite people in the entire world, I knew that along with loving the book and him on board the movie, I was bound to love it.

The first thing that I noticed about the release of the movie was how small the advertisement for it seemed to be. Wonder was highly thought of and praised in America, and in the U.K it had a very, very small release in to cinemas. It actually took us quite some time to figure out when it was released and where we could see it.

I was completely unsure of how they would handle the movie compared to the novel. The novel itself is set out in parts of character, giving different characters a prominent 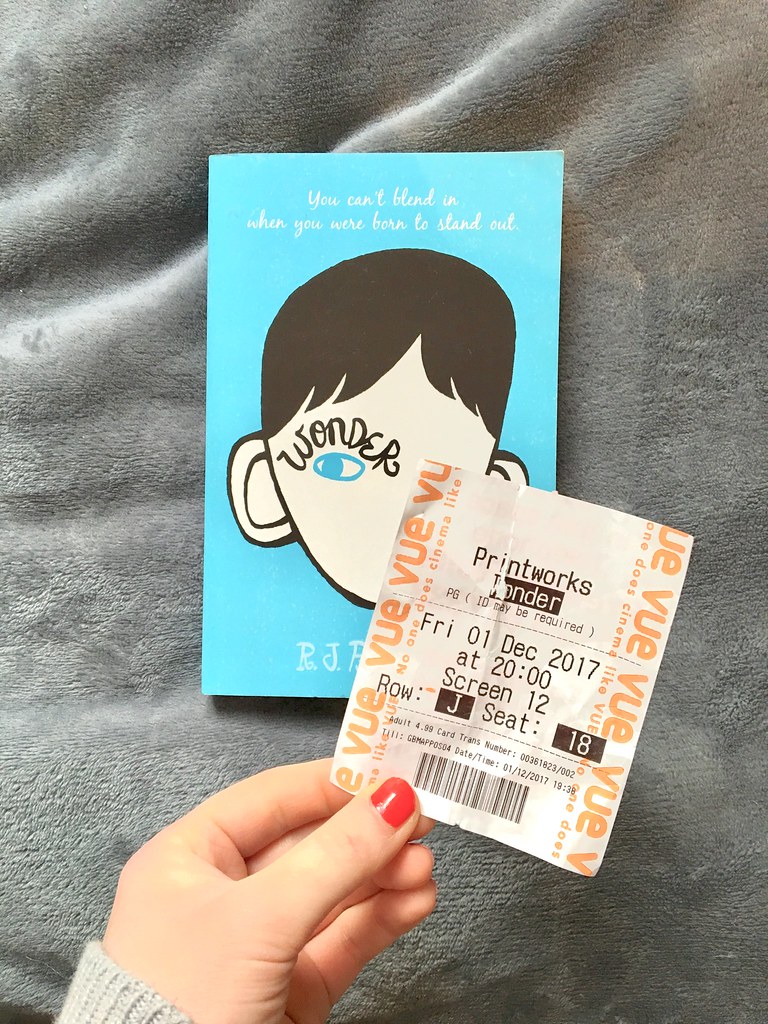 voice throughout the whole novel. This is really useful when getting to know some of the side characters, and also does not focus on Auggie, the protagonist. This technique allows us to experience one thing through the eyes of many, and I always found it to be one of the cleverest parts to the story. I was surprised to find out that they took this on board in the movie and set it out in a very similar way to the novel, in parts of character.

This was not the only thing that was very similar to the novel. The movie seemed to stick very close to the original story. From exact scenes to even the occasional spoken word being lifted straight from the page. I love it when movies do this, it feels like a nod to the readers at the most crucial times in the story.

One thing I wasn’t fond of was the inclusion of the field-trip scene towards the end of the story. Whereas I enjoyed the scene in the novel, I found it very awkwardly put in to the movie and quite unnecessary in its placement. It felt very rushed towards the end (it was in fact the ONLY scene in the whole movie that felt rushed to me) and was changed quite significantly from the original scene. I feel like the movie would have been a whole lot better seven minutes shorter and had that part removed.

When I first found out about the release of the movie and saw the cast listings, admittedly I was not overly impressed. I found Owen Wilson to be a strange choice for Auggie’s dad for a start. However, I ended up adoring the cast, dare I say I even appreciated the supporting cast of his family way more than Auggie as a character.

Personally, I ended up very invested in the other characters as their stories were told out a little more clearly on screen. For example I really ended up loving Via and her boyfriend, and the little backstories that we saw of them. I also very much enjoyed Jack as a side character. I think the movie was definitely very good for appreciating every character within the story instead of just the protagonist.

Overall I really did enjoy Wonder. It felt like a very cheesy and pure movie that was easy watching. It felt quite Perks Of Being A Wallflower like. There were a few smaller parts that I didn’t love the change in the story to, however all-in-all, it felt like a very important movie about friends and family and a very good representation of a fantastic novel.