I picked this book up on a Waterstones trip not too long ago. I’d seen the title announced as one of the books featured at YALC this year, however something kept putting me off. Once i’d read the back and decided it had very clear vibes of The Breakfast Club, i knew i had to read it. 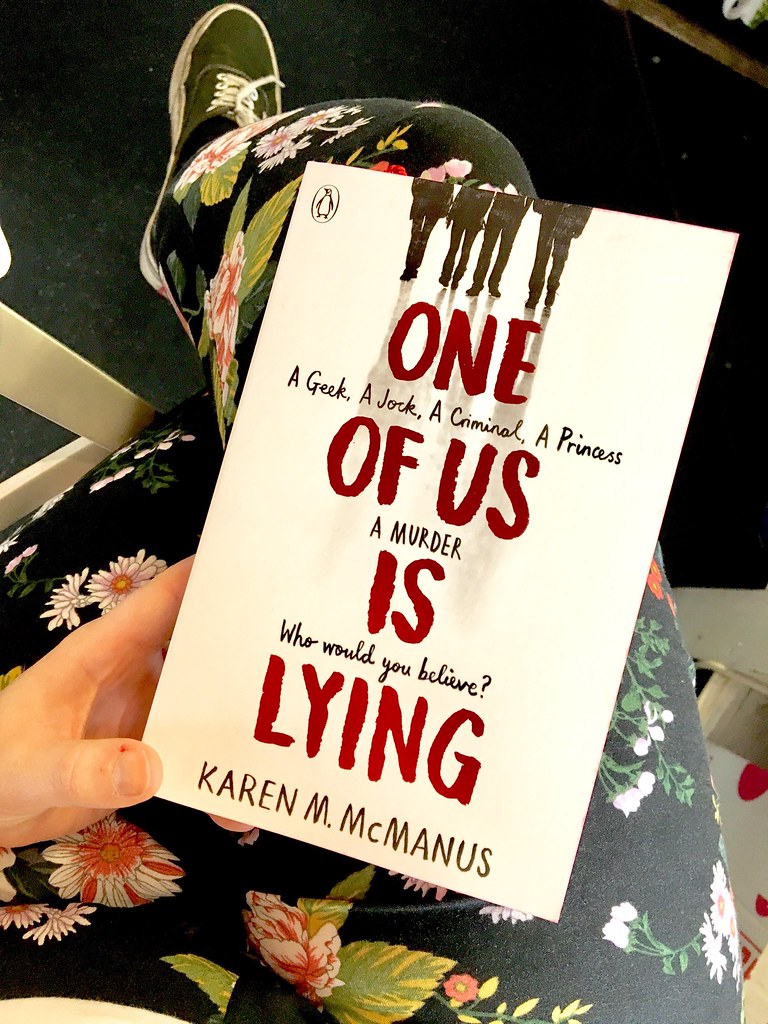 Title: One Of Us Is Lying

Sports star Cooper only knows what he’s doing in the baseball diamond.

Bad body Nate is one misstep away from a life of crime.

Prom queen Addy is holding together the cracks in her perfect life.

And outsider Simon, creator of the notorious gossip app at Bayview High, won’t ever talk about any of them again.

He dies 24 hours before he could post their deepest secrets online. Investigators conclude it’s no accident. All of them are suspects.

Everyone has secrets, right?

What really matters is how far you’ll go to protect them.

First of all, One Of Us Is Lying took me a LONG time to get in to, thus meaning it took me a long time for me to read. I ended up spending about three weeks on this book, which for me at the moment is very long. At first a lot of names are thrust at you with very little explanation to who they are, what relevance they have to the story and who they’re connected to. The basis of this book is all about the characters. Effectively everyone in it is in the picture for the murder of a character at the beginning, the story follows on from there. However when you have five main characters (who all have a point of view written from) and then their boyfriends, girlfriends, sisters, brothers, parents and other school kids thrown in, it can take a while to figure out who is who.

Once i’d gotten over the mass amount of people, i started to find the characters i connected with the most. Bronwyn and Nate quickly became my favourite people to read about, and even at the end i never connected with ‘princess’ Addy. Whereas i liked the characters personalities, and it was obviously cliched (i think on purpose) that they were all so different, i still found them a little dry. There was a lot of character development but nothing really shown how they managed to develop, they just changed.

The story-line itself was very well thought out and written. The twists in the story were things i didn’t see coming and whereas i found the ending a little abrupt, it was clever and unexpected. Up until the end i wasn’t expecting a twist to the story, or the real murder to come out, but the way it was handled was great. Easily this was one of the best mysteries i’ve read plot wise.

I’ve been advertising this to people as ‘The Breakfast Club with death’ and that’s probably about right. It would have been nice to have a little more backstory in the beginning so a lot of information wasn’t thrown at you, but otherwise it’s a very enjoyable book. I know people that have absolutely loved this story and i do think it appeals to everyone. I’d definitely pick up a copy, despite my few tweeks i’d make.

One thought on “One Of Us Is Lying by Karen M. McManus -Review”