It’s been quite a while since i’ve done a book haul. My lent goal this year was to not buy books while it lasted, and i actually achieved it! However, i may have put some in the store cupboard at work for when it was over, and i also treated myself to a few Amazon purchases in the first hour after it ended. Along with that and being on holiday and some new releases, i’ve managed to acquire quite a few new books in the last month or so. I would by lying if i said i’d remember everything i got, so here’s a snippet of what’s joined my shelves recently.

Perfect by Cecelia Ahern
This was the first book that i picked up right after lent was over. I couldn’t wait to get my hands on the continuation of the Flawed series. The first book was released last year and i mentioned in my Time and Place book tag that it holds a very special place in my heart. I have very high hopes for this read and i really want to get around to it soon.

Always and Forever, Lara Jean by Jenny Han
Again this is something that i wanted to get hold of quickly so i could finish off (i think finish, i’m sure this is the last book) the Lara Jean trilogy. I’ve already started reading this and it’s everything i hoped for and everything i imaged it to be. I’m so happy to be back with Lara Jean and all these characters i loved, it’s such a comforting read. 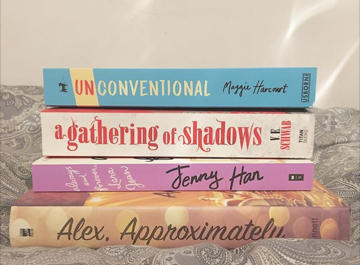 Since starting our LGBTQ+ Book Club i’ve found an increase in interest in LGBTQ+ books. It Looks Like This has been on my wishlist for quite a long time, and you guessed it, was in my first order after lent. This is another one i want to get around to quite quickly.

Alex Approximately by Jenn Bennett
For a few years now, Jenn Bennett has been one of my favourite YA contemporary authors. Her novels are such light, easy reads with interesting and unique story-lines. I adore her writing style and characters. She’s also been interviewed for the blog! Alex Approximately was luckily released in the U.S. as my girlfriend was there, so obviously i made her pick me up a copy and cart it back to the U.K. Absolutely no regrets.

A Gathering Of Shadows by V.E. Schwab
I have absolutely no excuse for adding to my V.E. Schwab collection when i’ve still not read a single thing she’s written. I found this really cheap and have A Darker Shade Of Magic, i figured i’d just read them back to back at some point…

Release by Patrick Ness
Patrick Ness is touring around the U.K with his author events at the moment. It’s hitting Manchester and there was absolutely no way i’d be missing that. I found a copy of his latest novel a few days before release (ha) and picked it up in preparation for the event. I feel like this has been the least talked about Patrick Ness novel, so if you’ve not heard of it, go check it out.

Why We Broke Up by Daniel Handler Maria Kalman
This is another book that’s been on my wishlist for a long time, and i very very nearly picked up a copy last year at YALC. However, i never found it at a price i was happy paying. I’ve never read anything by Daniel Handler writing as Daniel Handler. I found this copy in work (like seriously, a massive box of YA book donations turned up and i raided it) and i couldn’t turn it down when my boss marked it at 99p for me. 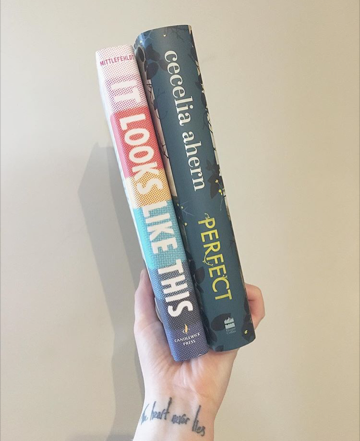 news. A lot of hype has been made around her latest release, The Upside Of Unrequited and it made it very difficult to not pick it up. I cannot wait to read this one after loving Simon Vs The Homosapians Agenda.

Big Little Lies by Liane Moriarty
This is something else that i cannot seem to really get away from at the moment. I found this little bargain at work and (yes again) by boss marked it down to 99p for me. I’m purely going to read this ahead of settling down to watch the series. I’m a sucker for Shailene Woodley.

Books v. Cigarettes by George Orwell
When i visited the Lake District in April i go in the same independent book shops usually. There’s a specific one in Grasmere where i go and try to pick out something that i wouldn’t usually read. This time i chose one of George Orwell’s essays about the ‘perils of second-hand bookshops’ among other things. I am really excited to read this one to be honest.

There are a few other books that i picked up throughout the month, however i think this post is getting a little long as it is. I’ll leave it here. I hope you’re enjoying BEDM so far and this post gave you some inspiration for some new buys!