Yesterday was the Patrick Ness evening for his latest novel Release in Manchester. It was hosted by Waterstones and held in the famous central library in the city center. Having been to a few events here held by Waterstones now, i was particularly excited. 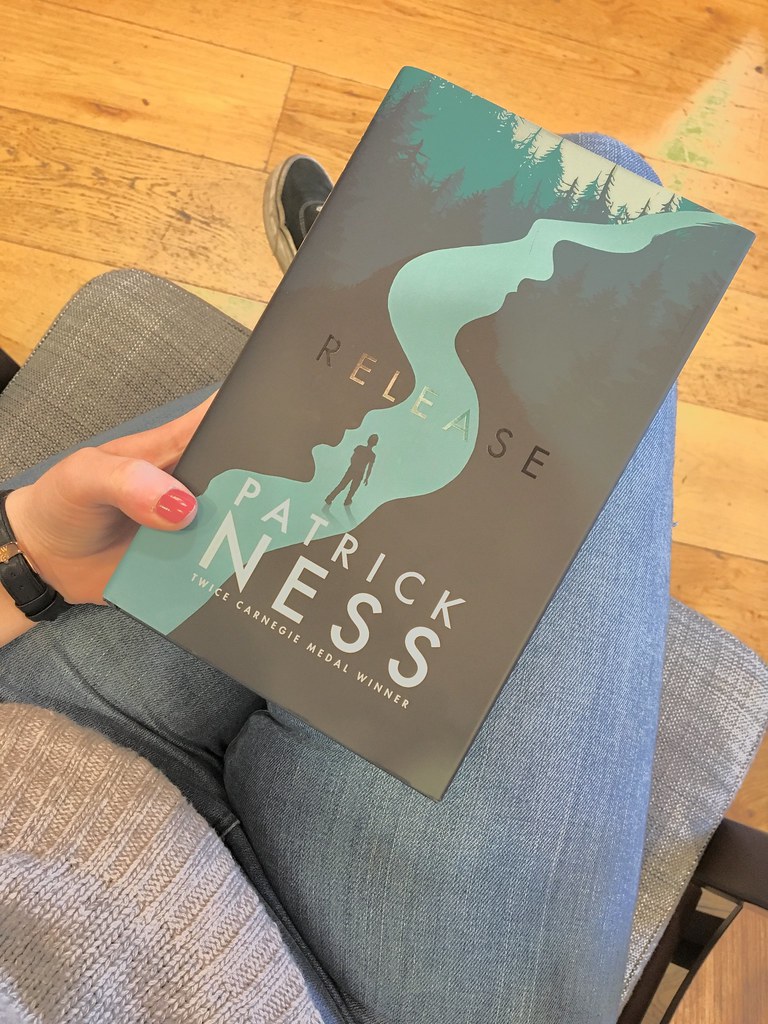 Since i read A Monster Calls a few years ago, i completely fell in love with Patrick Ness. His writing style and characters are something to simply be marveled at. I aspire to write as he does. Since he found success with more and more published novels, A Monster Calls movie and also Class the TV show, i thought my chances of ever hearing him talk or meeting him were slipping further and further away. So i’m still a little shocked this has happened to be honest.

The event was similar to any other. Hosted questions to Ness for about half an hour to begin with. He opened with the thought that he never had imagined he’d released ten books, that he dreamed of always having that one written book in his hand. However this event was in fact for his tenth published novel, Release.

I learned quite a lot about Release, i started reading it about an hour before the event, didn’t get very far but loved what i had read so far. I found out that it is modelled on Miss Dalloway by Virginia Wolf, a novel that is very close to Ness’ heart. In a very similar sense of Miss Dalloway, Release opens with flowers and closes with a party. He also divulged that writing his latest 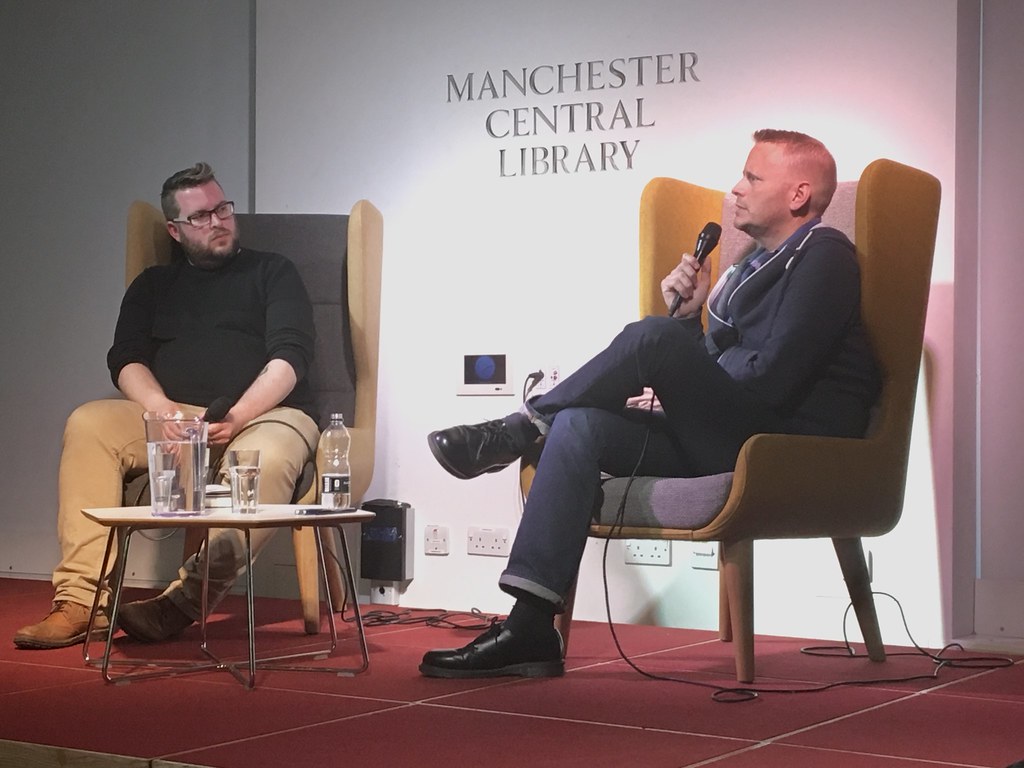 novel over a one day period meant that it took away some of the safety nets he had in place from previous novels – it gave him a challenge.

One of the main themes of the talk was teenagerhood and the themes of the story. Release follows Adam, a seventeen year old boy who is going through this very challenging day in his life in which everything is changing. Ness thought it important that even though Adam is gay, it wasn’t a story about ‘coming to terms’ with being gay (in fact, he said he cannot stand books that follow a ‘coming to terms’ with being gay story line). Instead the book is much more about what teenagers do in the general term. Ness mentioned that being a teenager is never discussed. No-one really wants to talk about the things teenagers do, but they go and do them anyway. He didn’t want to be coy about topics such as sex (that features heavily in this novel), and he said…

If you don’t talk about sex responsibly you are abandoning a teenager to learn about it for themselves.

At the same time, he made comment about Release not wanting to come across as ‘a forty five year old man writes pervy scenes about kids,’ which had the whole room laughing. 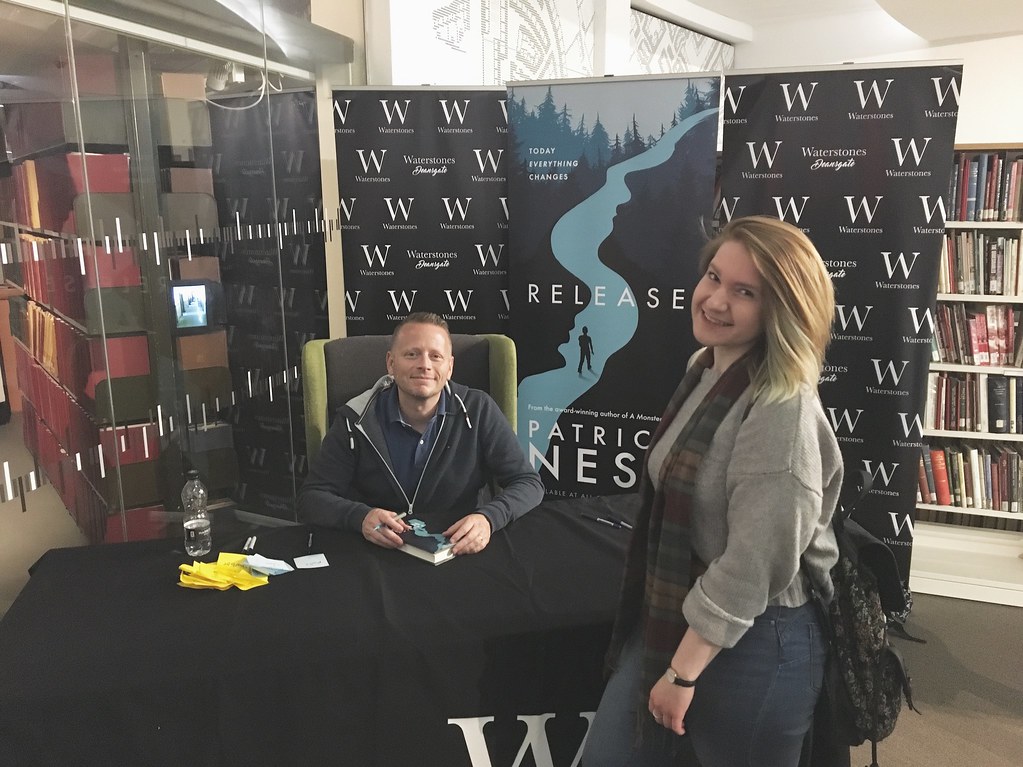 The questions got moved along to audience questions, and when asked about what happens to Adam after the book, considering it’s such a short space of time, Ness pointed out that ‘the world ends all the time.’ Meaning that once Adam’s world ended at the end of the novel, it will carry on tomorrow, but the world as he knew it on that day was gone. I personally found this to be quite an inspiring and lovely little quip.

As an aspiring author, i always find it most interesting when authors talk about the process in which they write. Ness has had many successes with the books he has released, and as a very experienced author he had some interesting takes on how he writes. He told one lady that the writing process time never gets shorter. It takes the same amount to edit a novel as it did ten years ago. He also pointed out that transferring from novel writing to screen writing was a ‘piece of piss.’

What i found most interesting was his comparison of books to songs. He said that books are not songs, they’re performances, and at the time it took me a few moments to understand that. The song is the idea, the story-line, what you want to make this wonderful thing from. However, people pay to see the performance and how you round that off to be enjoyable for other people is what really matters. So your book is your performance that is ready for the world to see. I love that analogy of the writing world 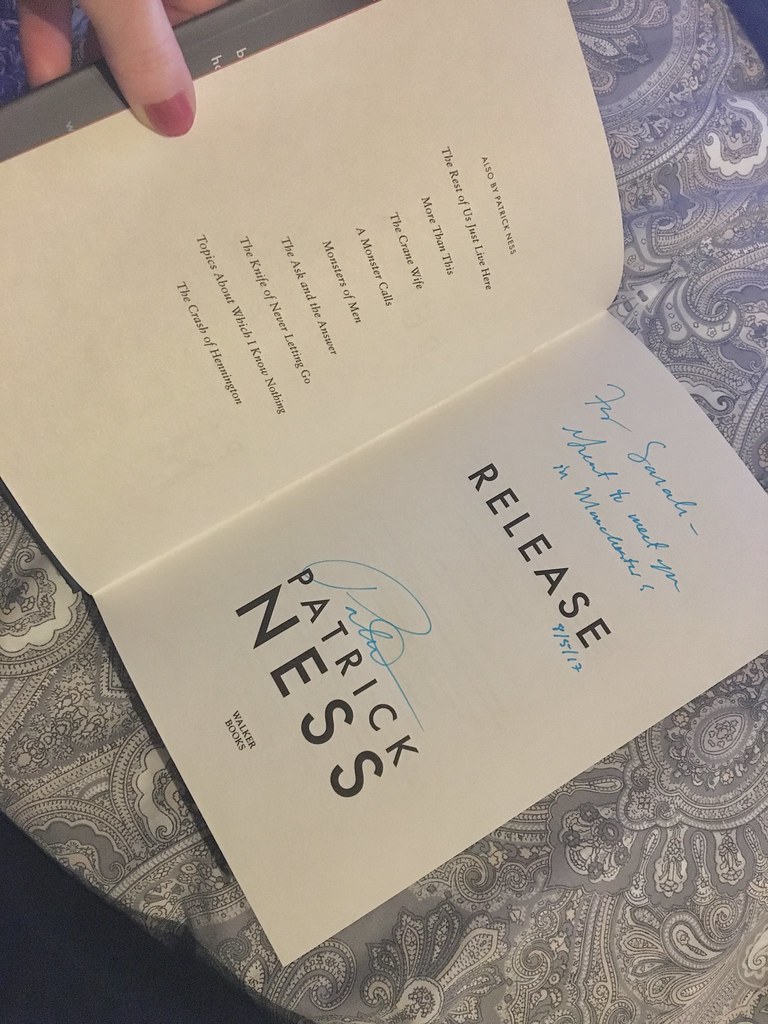 and i think that’s something i will take with me. In addition to that he commented that ‘the great thing about fiction is that you can disguise yourself in the middle of it’ and as a writer i’ve never based what i’ve written on myself. It’s something i might try.

When we got around to the signing part of the evening, i asked Ness if he had any tips to get back in to writing after a break. Surely in his life as an author he’d taken a break which meant it was difficult to regain his connection with writing. He gave me a tip that works well for him. Set daily goals. Set a goal of say five hundred words a day and don’t go over that goal. Don’t exhaust yourself and lose your idea, then the next day set another goal, and so on. That’s something that i definitely will be thinking about in the future.

Overall this was another wonderful event and one of the most interesting author talks i’ve had the pleasure of attending. If you ever get the chance to see Patrick Ness speak, i highly advise you to.

3 thoughts on “BEDM: An Evening With Patrick Ness – Manchester”