I know Sarah has reviewed We Are Okay already (stick with me) but the point of our LGBTQ+ Book Club is for us both to review the book separately! Sarah reviewed it about a month ago so it has probably been a nice break for everyone to now read another take on it. Nina LaCour’s latest release was our first choice because we both love her past books and honestly we couldn’t bear to leave We Are Okay waiting for months on our bookshelves! On with the details and review…

Title: We Are Okay 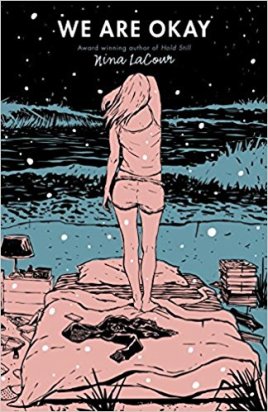 Summary: Marin hasn’t spoken to anyone from her old life since the day she left everything behind. No one knows the truth about those final weeks. Not even her best friend, Mabel. But even thousands of miles away from the California coast, at college in New York, Marin still feels the pull of the life and tragedy she’s tried to outrun. Now, months later, alone in an emptied dorm for winter break, Marin waits. Mabel is coming to visit, and Marin will be forced to face everything that’s been left unsaid and finally confront the loneliness that has made a home in her heart.

I have to start this by saying LaCour is one of my all time favourite authors. I adore her other books and I couldn’t wait to start this one. I had high hopes for this book and I was not disappointed. In fact, it’s now sitting on the section of my shelves dedicated to my favourite books so I think you can tell which direction this review is heading.

We Are Okay doesn’t have a whole lot happen in the present but it is very character focused and does have a fair few flashbacks. I personally adore stories where ‘not much happens.’ In-depth characters with brilliant development are an essential part of a good story in my opinion. Any book/film/tv show etc. which I don’t like is mostly due to lack of character depth and development. Marin, Mabel, the families, Marin’s friend, Hannah – all of them are well-rounded, wonderfully written characters. They feel so real.

Realistic character writing is something I really have to say LaCour is amazing at. I felt like I knew Marin. It’s the little details that help to create her, like the yellow bowls in her room, some of her only possessions. Though out of context this doesn’t seem to mean a lot, when you read about Marin’s possessions and the way she feels in her surroundings, little details mean a lot.

Another character driven detail LaCour always writes amazingly is emotion. We Are Okay is not like any other YA book I’ve read before. It isn’t cheesy or pretentious. Sure, I have read other books which capture emotion beautifully but there were specific paragraphs and lines in this one which really got to me.

When Marin would describe her feelings for Mabel and how they have changed or describe how she was feeling generally, I felt so connected to her. I felt such empathy for feelings I haven’t personally had before but I could feel her pain and anguish. There is a specific scene in a diner when Marin is sitting opposite Mabel and she thinks about what she should do, will do and would have done in the past in this situation. I don’t know why such a small section got to me so much but it did. It highlighted so well their changing relationship and how broken it was and how certain things just can’t be fixed. It’s safe to say I cried a little (when I say ‘a little’ I really mean a lot).

I’ve never experienced this kind of relationship breakdown personally but the way it was described felt so real to me. I started tearing up at the prospect of ever feeling this way in my lifetime. Marin’s feelings and the interactions between her and Mabel were described so beautifully I found myself dreading heartbreak as I read! I think that’s pretty powerful.

As usual, LaCour writes a relationship between two girls in such a real and wonderful way. I say this every time I review a good representation of gay characters/relationships, but it is so important to see positive, real portrayals. This book is no exception. The sexualities of the main characters are so normalised and that is such a beautiful portrayal to read.

I cried my eyes out for the end of the book. Tears of sadness, anger, happiness. Every kind. I was so emotional! Which, I will be honest, is not unusual for me but wow. This book is everything. I am in love with it. I can’t stop thinking about it.

Let us know in the comments if you’ve read it/want to read it. I highly recommend it.

4 thoughts on “We Are Okay by Nina LaCour Review (Sophie)”