As many of you will know, the release of the new live-action Beauty And The Beast movie starring Emma Watson was released last week. So much hype has been around this movie, and as i’ve seen it, i can say personally i found it to be the best live-action movie Disney have made. However, because there’s a lot of hype around the story now, many books have been released either with the original story or new versions, spin offs and whatever else you can imagine starring Belle. Keep reading for some of the magical Disney books that have been released in the last few weeks!

Beauty and the Beast written by Gabrielle-Suzanne Barbot De Villeneuve Illustrated by MinaLima
I like Harry Potter, who doesn’t? And my two favourite illustrators are MinaLima, the brains behind all the magical designs from Harry Potter. They have illustrated a collection of Disney stories which include Peter Pan and The Jungle Book. Beauty and The Beast is the latest to be added to the pile and brings together the wonderful story, along with their fantastic illustrations. I absolutely adore this book and if you’re quick there’s still some 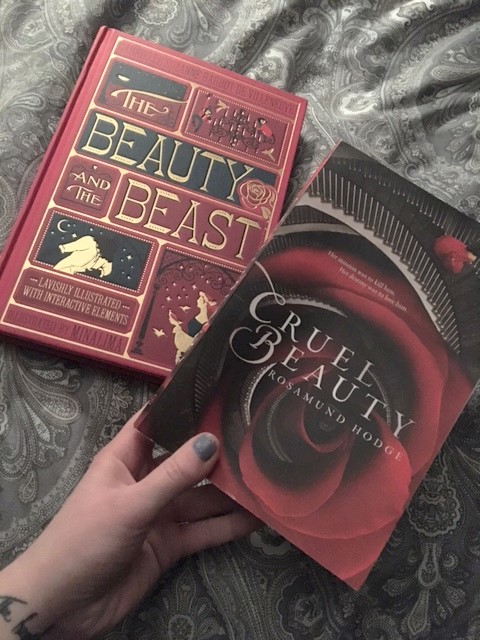 Beauty and The Beast Book Of The Film
When a new Disney movie is released, you can guarantee to see the ‘book of the film’ books on the shelves. Beauty and The Beast was absolutely no different. If you want to add to your collection of movie books, the latest is out for you to pick up! It’s a simple story as told in the  movie, its a great way to read along with the movie.

Cruel Beauty by Rosamund Hodge
If you’re looking for a twist on the classic Beauty and The Beast story, try Cruel Beauty. This retelling of the original story has been given a fantasy twist which is perfect if you don’t want too much ‘Disney’ in your life. Nyx is destined to marry the ruler of her country, however when she moves in to the castle on her seventeenth birthday, she does not expect such a charming new husband waiting for her.

Disney Beauty and the Beast Lost in a Book by Jennifer Donnelly
Not so much of a retelling as a sequeal to the original story. This novel takes us past the story we all know and in to new worlds as Belle discovers everything can change through her magical library. Belle has to figure out how to get herself home before the stories take hold and never let her go.

One thought on “Beauty And The Beast Novels”