I’m a big fan of Rainbow Rowell’s work. She writes the perfect YA story that you can melt in to. It’s easy reading for a time when you don’t really know what else to read. Attachments is the first adult novel of i have read of hers, and i wasn’t disappointed in finding out it has the exact same charm as her other novels. 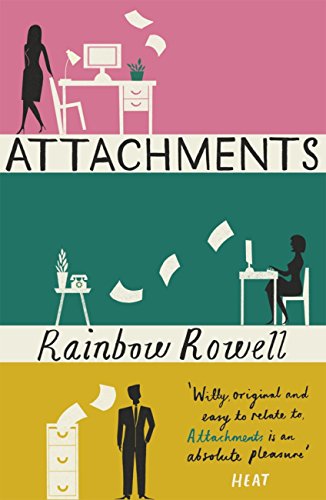 Summary: It’s 1999 and for the staff of one newspaper office, the internet is still a novelty. By day, two young women, Beth and Jennifer, spend their hours emailing each other, discussing in hilarious detail every aspect of their lives, from love troubles to family dramas. And by night, Lincoln, a shy, lonely IT guy spends his hours reading every exchange.

At first their emails offer a welcome diversion, but as Lincoln unwittingly becomes drawn into their lives, the more he reads, the more he finds himself falling for one of them. By the time Lincoln realizes just how head-over-heels he really is, it’s way too late to introduce himself. What would he say to her? ‘Hi, I’m the guy who reads your e-mails – and also, I think I love you’.

After a series of close encounters, Lincoln decides it’s time to muster the courage to follow his heart…and find out whether there really is such a thing as love before first-sight.

Lincon is hired to read other people’s emails and snoop around the office computers after dark. Well not exactly, but that’s what he ends up doing when he finds a conversation between workers Beth and Jennifer. Beth and Jennifer have worked for the newspaper for years and have become best friends. Both enjoy talking about their failed love lives over work email. After Lincon becomes Beth’s ‘cute guy’, Lincon cannot help but keep snooping around their emails.

One of the most refreshing things about this novel for me is the fact that it is set in 1999. This is a time when computers were well used and email was really starting to take off. The fact that the whole story was based around this felt quite strange but inviting for a 90’s kid like myself. I barely remember a time when computers weren’t used every day, so it was great to hear about something like that.

I found that Rainbow’s writing for an adult novel is just as great as her YA writing. It kept it’s whittiness, but added a few more adult jokes. Perfect for someone (like me) who is growing up and stepping away from the cliche’s of YA writing a little. I loved reading a more ‘grown up’ novel that had the love lives of 30 year olds instead of 16 year olds. It made me want to read so much more of her writing.

The story itself was split in to two sections, chapters that completely were narration of Lincon’s story and his daily life, reading work emails and playing D&D with his friends. And the other chapters were comprised of Jennifer and Beth’s emails to one and other. I love stories that are written in email and messages. I feel like it really makes you get to know characters as you see how they write and the quirks they have in their own speech. It also makes stories go by very quickly, which is always a plus. From this, i got very attached to the characters quickly and fell in love with them.

I felt like the story was as plausible as could be. It had drama, desperation and lust, thrust in to some email exchanges. It was never going to feel completely real, as it is essentially about characters falling in love without really knowing each other, but it was written well enough for it to feel like it wasn’t completely impossible. I really ended up enjoying the storyline, even through it’s slightly downsides.

As most chick-lit novels do, the ending felt rushed to me. A lot happened in a short space of time, therefore i lost interest a little. However it did not deter from this wonderful love story i spent a week of my life invested in. I’ve heard a lot of mixed reviews about Attachments, but i firmly can say that i loved the story!