Last night i was lucky enough to attend The Worlds Collide event with Rainbow Rowell and Leigh Bardugo. These are two authors that i love immensely, so i felt very fortunate when i managed to snag a ticket to the very short U.K tour. Leigh was on the road to promote Cooked Kingdom, the second novel in her Six of Crows duology. As far as everyone was aware, Rainbow just joined on for the hell of it, spreading the joy of her five previous novels.

First of all, this was one of the best bookish events that i have attended. It was well organised, ran (nearly) to time and was calm. Considering these ladies have a huge fanbase, the whole experience was relaxing, it felt like just hanging out with two of your friends. They started with a chat, and continued to act out a scene from each of their latest novels (Crooked Kingdom and Carry On). Watching two

woman act out scenes from each others YA novels is hilarious, let me tell you.

It was great to see an insight in to the books that i have not yet read, and it gave me some really good imagery for when i get around to reading them! Leigh Bardugo’s menacing giggle is something that i’ll never get out of my head.

The talk also gave us great lines such as:

Just muggle up and get it done.
– Leigh Bardugo on killing Voldemort with guns

My publisher thought that ‘Fangirl’ was a term that British people would not understand
– Rainbow Rowell on why Fangirl was released in the U.K. a year after the U.S.

The idea that a U.S. publisher believed that ‘fangirl’ was not a universal term got quite a big laugh i’m telling you.

After questions asked by the audience, there was a signing where the ladies would sign any copies of any of the books. This was a particularly nice change from the usual ‘show me your receipt to prove that you bought this book from here’, that you could take your pre-loved books with you to get signed. It’s always nice to get a book signed that you’ve read over and over and loved unconditionally.

As usual the ladies were lovely, so down to earth and wonderful to chat to. I got my copies of Eleanor and Park and Fangirl signed by Rainbow, and also the Six of Crows duology signed by Leigh.

Rainbow talked a lot about being observant as an author, that you try and take in as much information as possible to try and find a story in it somewhere. 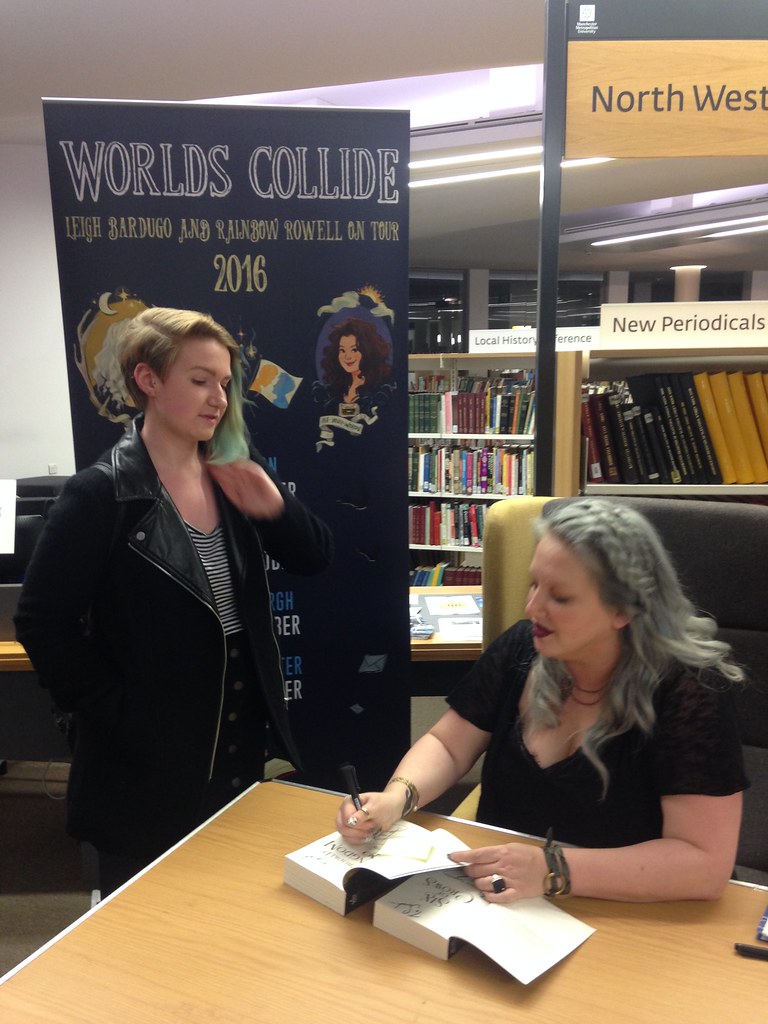 Whereas I did a little digging while Leigh was signing and asked which series she found more difficult to write. She said that Six of Crows pushed her a little more with her writing, more so than Shadow and Bone did, so overall the second series was more difficult but more fulfilling. However she added that Shadow and Bone was the first draft she had ever completed and as it was discussed earlier, first drafts are always the hardest to get done.

So i walked away with my signed books, a nice new badge and a lot of funny and happy memories of two wonderful women and incredibly talented authors. Both are two of my favourite writers and never did i think i’d get the chance to meet them, so i feel very privileged and lucky today.