If you’ve not heard already (sarcasm), we went to YALC this year! Me and Sophie both had an amazing time and cannot wait to return next year. In case you didn’t know, YALC is the Young Adult Literature Convention created by (Queen) Malorie Blackman. It was put in place so that readers of YA literature could have a place where they can celebrate their books with other readers. So that’s exactly what we did. Here’s my round up of our whole day so you can see what we got up to!

The Day
Because we chose to only do Saturday of the event, it meant that we had to travel from Manchester to London first thing in the morning. Yes, this meant we were up at 4am and arrived in London at half 9, probably wasn’t the smartest move on our part.

We arrived at Kensington Olympia at half 9 in the morning and managed to get in to the building at 10 for the start of the Rebellion talk. We knew once we got in there we had to be a little lenient with the plan we made. It’s impossible to do everything at YALC in one day, so many things overlap. So you have to be very careful with what you chose to spend your time on. Ultimately, having carried

about eight books each from Manchester to London, we figured we wanted to get them signed. So then missed out on a lot of the talks that were happening. Sacrifices have to be made!

We also attended one of the writing workshops while we were there! We both wanted to join in on the Writing YA talk with Keris Smith, which was (although a little noisy being right beside a signings queue) quite a useful workshop. I’ll be writing a full post on this so all the budding writers can hear what Keris had to say about her

novels and how she writes.

Having been up so early, admittedly we were dragging our heels by mid-afternoon. We book shopped, stood in signing queues and spend a lot of the rest of our day sat on the floor to conserve energy.

The day finished around 6pm after the poetry slam. I wasn’t expecting to enjoy the poetry slam as much as i did, but there was some incredible talent that got up and performed with such confidence, i was completely in awe. It kind of helped i’m a little bit of a poetry geek. And that was the day! We grabbed a pizza (one thing to say is, if you’re only there for a day, there is no time to eat at all!) and got on our train for our long journey home!

Talks
As i said we didn’t get chance to sit in many talks as the signing queues over-ran etc. But we managed to sit in the ‘To Boldly Go’ talk with Malorie Blackman for a couple of minutes. Even those few minutes gave me an insight in to the wonderful person Malorie Blackman is. We also sat in the Rebellion talk for a few minutes. At the end of the day we knew the one talk we really wanted to go to was David Levithan and Nina LaCour’s talk on their new novel You Know Me Well. I’ve seen David talk before, and i’m always in awe of how relaxed and confident he is in what he writes. It was the perfect end to the day.

Having carried a lot of books all the way there, we figured it would be stupid not to try and get them all signed. We ended up meeting Kass Morgan, Alwyn Hamilton, Lisa Williamson, David Levithan, Nina LaCour, Malorie Blackman, Sarah Crossan, Sophie Kinsella and Kiran Millward Hargrave. All the authors were incredibly lovely (even though i had to ask Alwyn Hamilton to just sign my book and move on *oops*), especially Lisa Williamson who took out quite a bit of her time to talk to me about my university course and the workshop that i’d signed up for that day. She’s one of the loveliest authors i’ve ever met and had such a positive experience with her.

When you’re at YALC, all the authors are so lovely because they’re truly in an environment where they want to be, surrounded by readers and books and everything they love as much as we do. It makes for great author chats and experiences.

Things I wish I’d Done
If i had more time at YALC, i would have done so many more things as there’s so much more to explore. This is mainly the reason why i want to go back next year. There are so many more workshops that i wish i had gone to, and so many more books that i could have gotten signed by the authors there.

One of my main regrets about YALC was missing the ‘Secrets and Lies in YA’ talk with Sarah Crossan and Sophie Kinsella. It was one of the main events we wanted to attend, but were stuck in signing queues for Malorie Blackman and David Levithan at the time. Some things you need to accept you’re going to miss, and sadly that was one of them.

Round-Up
So after a super long and fun day in London, i made the promise to return for the full weekend next year. I had the most amazing time and cannot thank the authors and everyone behind the scenes enough for the work they put in to make it an enjoyable experience for everyone. I managed to get my hands on quite a few books that i’m more than happy about (to come in our YALC Haul soon!) and hopefully they will keep me busy

until next year! Here’s to more of this next year: 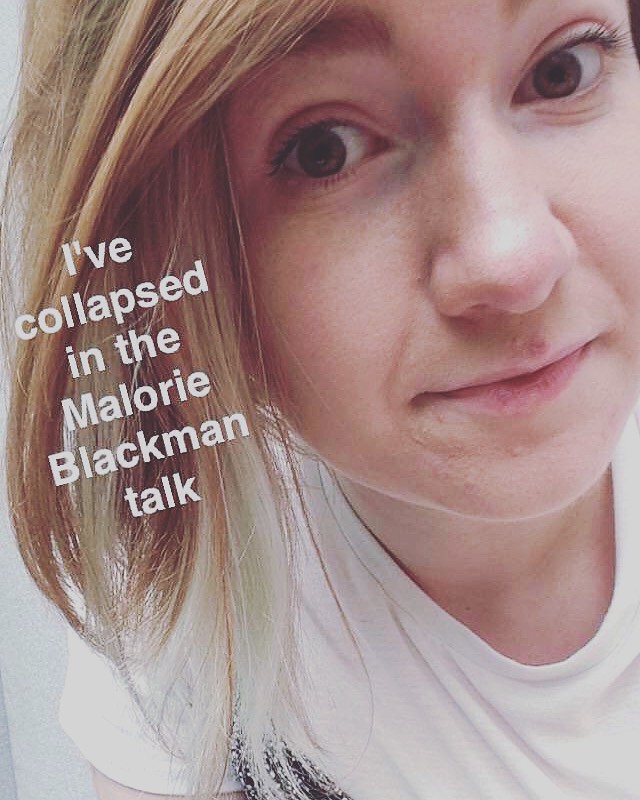